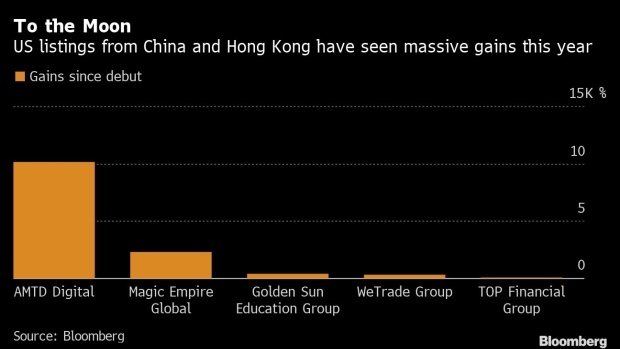 (Bloomberg) -- Another little-known Hong Kong-based financial services firm is mystifying investors with a dramatic price surge following its US listing.

Magic Empire Global Ltd., which provides underwriting and advisory services and has helped just one company go public since 2020, surged 2,325% in its debut session Friday in New York to a market capitalization larger than football club Manchester United Plc. Magic Empire is the seventh firm this year from Hong Kong or China to experience similarly surprising moves.

“This price level has clearly shown it is not sustainable,” said Ken Shih, head of wealth management in Greater China at Saxo Capital Markets HK Ltd., adding that without knowing who is doing the buying, it is hard to be definitive. “At this point, downside risk for investors clearly outweighs upside.”

Last week, Hong Kong financial services provider AMTD Digital Inc. briefly became bigger than Goldman Sachs Group Inc. after a 14,000% gain in less than a month. The moves are particularly notable at a time of otherwise muted IPO activity and with Chinese companies Alibaba Group Holding Ltd. and JD.com Inc. threatened with delisting if they fail to comply with American auditing standards.

Magic Empire reported revenue of $2.2 million in 2021, a 17% drop from a year earlier. The company’s operating entity, Giraffe Capital Ltd., completed just one IPO in 2020 and none last year “due to COVID-19 and volatile outlook of the Hong Kong capital market,” according to the prospectus. Friday’s price surge brought Magic Empire’s market capitalization to $1.9 billion.

“The wild swings are likely due to the concentrated ownership, which certainly raises red flags,” said Kakei Lam, fund investment officer at Metaverse Securities Ltd. “I don’t see a resemblance to the meme-stock mania, given the thin trading volume.”

Magic Empire’s chairman Gilbert Chan Wai-ho and chief executive officer Johnson Chen Sze-hon co-lead Giraffe Capital, which obtained a license to provide corporate finance services in 2017. The firm mostly works on IPOs on GEM, the small-cap exchange, and often engages other small local brokerages as underwriters, including KOALA Securities Ltd., HKMonkey.com and Yellow River Securities Ltd. Chan and Chen own most of Magic Empire, with a combined stake of about 63%. The firm had just nine employees as of December 2021, according to its prospectus.

About half of the companies Giraffe Capital has taken public jumped on the first day, some by as much as 125%. Seven are now trading 30% to 92% lower than IPO price and another has been delisted.

Magic Empire didn’t respond to an email request for comment and calls to the phone number listed on its website weren’t answered.

In the first half of this year, fundraising in the Hong Kong IPO market dropped 92%. With the tiny companies that make up their customer base under close regulatory watch, small- and mid-sized financial advisory firms like Giraffe Capital have had a particularly tough time.

The SFC declined to comment for this article, but has previously identified four typical features of problematic IPOs:

Magic Empire’s relatively modest revenue means it qualifies as an “emerging growth company” under American legislation, according to its prospectus. These firms enjoy reduced reporting requirements compared to larger US-listed public companies, with only two years of audited financial statements required and disclosure obligations regarding executive compensation pared back.