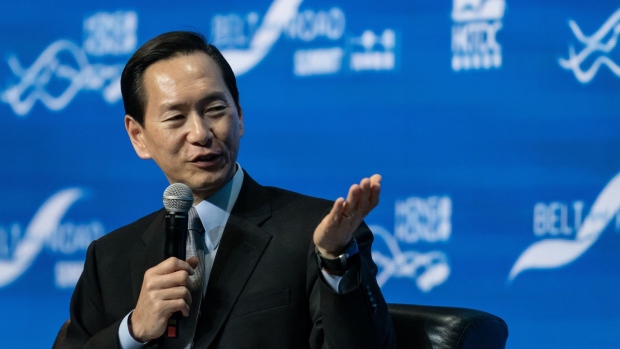 (Bloomberg) -- Hong Kong is stuck between China’s zero-tolerance approach to the coronavirus and the west’s reopening, and it has no clear idea how to satisfy Beijing’s demands so cross-border travel can resume, a top adviser to the city’s leader says.

Officials in the Asian financial hub can’t loosen some of the world’s strictest Covid-19 rules, despite their chilling effect on international business and travel, because the city is prioritizing reopening the border with China, says Bernard Chan, a financier who is also the convenor of Hong Kong leader Carrie Lam’s advisory Executive Council.

Yet there is no clear set of steps Hong Kong can take or goals it can achieve to convince China to reopen the border, Chan said in an interview on Monday. Going months without an outbreak -- the last one was in early June -- and more than 30 days without any locally acquired infections hasn’t been enough.

“Our hands are tied,” he said. “You have to meet their standards, and the trouble right now is -- we’re not so sure,” he added. “Initially, they were suggesting: ‘Oh, you need to have no cases for so many days.’ But now there’s no mention of that anymore.”

Chan’s comments highlight the conundrum facing policy makers in Asia that have a “Covid Zero” stance to stamping out local cases but are now struggling with how to get life -- and their economies -- back to normal. Singapore has taken a stuttering approach to reopening, while China has given no indication of when it plans to ease border curbs despite having vaccinated more than 1 billion of its people.

Hong Kong has minimized the impact of Covid-19 -- with just 213 deaths and around 12,200 cases since the pandemic began -- through a combination of strict policies that include mandatory hotel quarantines of as long as 21 days for inbound travelers, hospitalization of everyone infected, and isolation of close contacts in government facilities. As other countries reopened, Hong Kong’s relentless focus on maintaining zero cases left it further behind rival financial hubs such as London and New York, yet still unable to meet Beijing’s unstated conditions for cross-border travel that is crucial to the city’s economy.

Chinese officials told Hong Kong’s No. 2 official, Chief Secretary John Lee, that the city needs to strengthen screening, testing and quarantine measures for travelers, according to the South China Morning Post. They didn’t give any specific conditions for opening the border during the talks, which were held in Shenzhen over the weekend, the paper reported.

Hong Kong officials have tried to convince China they take the issue of inbound travelers seriously, but the cosmopolitan city is still viewed as a potential source of “leakage” for virus cases to creep into the mainland, Chan said.

“Before Covid, we were a financial hub,” Chan said. “And the definition of a hub is the ease of getting in and out. So we went from one of the easiest places to go in and out of, to now one of the most difficult places to get in and out because of all the Covid restrictions.”

Hong Kong is now a victim of its own success, Chan said. No local politician would dare go before the public and announce that the city was going to start taking risks that could lead to local virus cases, he said. While international business groups have expressed dismay, and one survey suggested more than 40% of expatriates were considering leaving the city, the vast majority of Hong Kong people support the government’s strict approach, Chan said.

“If you talk to expats or local people who do business overseas or people who have family overseas or have kids studying overseas, they think we’re nuts – they all think Hong Kong is crazy,” Chan said.

“But surprisingly, if you talk to the greater majority of Hong Kong people, they don’t think so,” he said. “The majority who don’t travel, who only travel for leisure, they don’t care. To them, safety and public health is more important.”

For them, the local economy and reconnecting with the mainland is much more important than the rest of the world, he said.