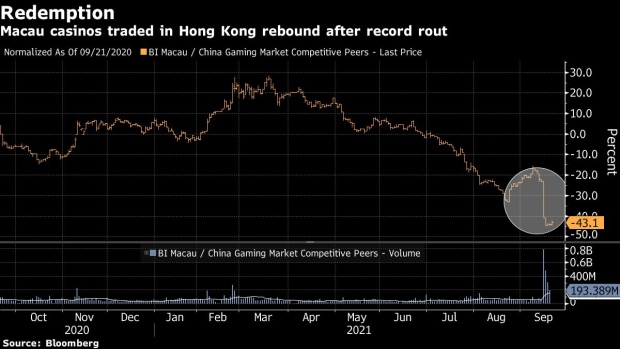 (Bloomberg) -- Shares of Macau casinos and Hong Kong developers rebounded on Tuesday as investors weigh whether they have gone too far in selling down the sectors on regulatory fears.

Hong Kong’s Hang Seng Property Index rose as much as 2.6% after some developers disputed an earlier Reuters report of pressure from the Chinese government. The gauge had tumbled by the most in over a year on Monday.

Meanwhile, a Bloomberg gauge of casino gaming shares gained as much as 3.8%, its biggest one-day move in almost two weeks, after officials late Monday said they were open to considering opinions about proposed regulatory revisions. Shares of Sands China Ltd. and Galaxy Entertainment Group both gained at least as much 4%.

“After an onslaught of policy announcements, regulators may take a breather given the impact on markets, providing a window for tactical trading opportunities,” said Bloomberg Intelligence strategist Marvin Chen. Despite the stabilization, Chen said he remains on guard for further policy risk to developers.

Holidays this week across much of Asia is also likely adding to the volatility in Hong Kong-listed stocks. China’s equities markets are closed until Wednesday, when Hong Kong’s will break.