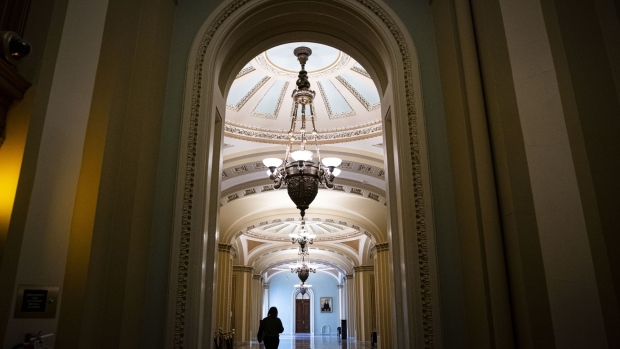 A congressional staff member walks through the U.S. Capitol in Washington, D.C., U.S., on Tuesday, Feb. 16, 2021. With Donald Trump's impeachment trial behind them, Democrats are quickly pivoting back to President Joe Biden's priorities, particularly his $1.9 trillion stimulus plan and confirming the rest of his cabinet. Photographer: Al Drago/Bloomberg , Bloomberg

(Bloomberg) -- The House Budget Committee advanced President Joe Biden’s $1.9 trillion pandemic-relief legislation, setting it up to pass the lower chamber by the end of this week.

The panel combined legislation written in various House committees in recent weeks -- pulling the $1,400 stimulus checks, enhanced jobless benefits, minimum wage increase, vaccine funding and other elements -- into a single bill. The vote in favor of the bill was 19-16, with no Republicans voting in favor.

The package now heads to the House Rules Committee, the final stop before it’s put on the House floor for a potential vote on Friday or over the weekend.

“We have ample fiscal space to provide the resources necessary to end the pandemic, mitigate its economic damage and build a stronger and more inclusive economy in its wake,” said Budget Chairman John Yarmuth, a Kentucky Democrat.

The Budget Committee action is a largely perfunctory step as part of the budget reconciliation process, the legislative tool Democrats are using, which requires only a simple majority in the Senate. That allows the bill to proceed without Republican support in a Senate with a 50-50 partisan split Senate, with Vice President Kamala Harris holding the tie-breaking vote.

Republicans were able to use Monday’s meeting to voice objections to the legislation, which they say Democrats are using as a way to pass long-standing policy goals and isn’t targeted to address Covid-19 related crises.

“Democrats are using the reconciliation process to move quickly because they have no interest in allowing Americans time to reflect on the policies they have proposed -- policies that will drive up the cost of living, destroy jobs, and bail out states that lockdown their citizens,” Representative Jason Smith, the top Republican on the House Budget Committee, said in a statement.

While the Budget panel wasn’t empowered to make changes to the package, the bill will likely undergo several revisions before it becomes law. The Congressional Budget Office said on Saturday that its cost slightly exceeds the $1.889 trillion limit the House and Senate had previously set. That means lawmakers will need to cut $31 billion in order to use the fast-track reconciliation process. The reduction could be included as an amendment on the House or Senate floor.

The bill is also subject to review to make sure it complies with the Senate’s reconciliation rules. Among the requirements is that all elements must have a measurable effect on the budget. The most prominent provision that might not be eligible a minimum wage increase to $15 an hour, which Biden himself has acknowledged could be changed as the bill makes its way through Congress.

The Senate parliamentarian may decide in the middle of this week whether the wage provision complies with the rules.

Senate Budget Chairman Bernie Sanders argues that the measure qualifies as a fiscal initiative, since the non-partisan CBO estimated it would increase budget deficits by $54 billion over 10 years. Opponents say the budget impact is “merely incidental” relative to the overall labor-market impact. The wage provision may also violate Senate rules against adding to deficits after 10 years, and therefore would require offsetting savings or revenue to qualify.

The House will have to vote again on the bill if it’s changed in the Senate. Congressional Democrats are aiming to have the legislation ready for Biden’s signature prior to a March 14 deadline, when enhanced unemployment benefits enacted in December begin expiring.