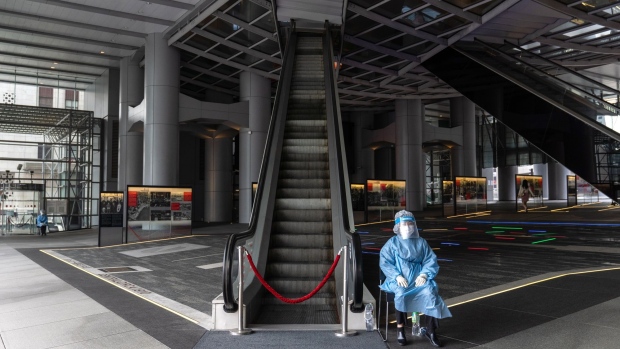 A security guard wearing personal protective equipment (PPE) sits next to an escalator at the HSBC Holdings Plc headquarters building, temporary closed due to the coronavirus, in Hong Kong, China, on Wednesday, March 17, 2021. HSBC's main Hong Kong office was closed until further notice after three people working in the building tested positive for Covid-19 amid a renewed wave of infections among the city’s business and expatriate community. , Bloomberg

(Bloomberg) -- HSBC Holdings Plc plans to allow up to 50% occupancy in its offices starting on April 12 as local virus infections abate in the financial hub.

“Businesses and functions can have a maximum of 50% of employees by teams working from the offices starting 12 April provided there is no deterioration in the local situation before then,” the bank said in an internal memo. It had previously said only critical staff should come to the office.

The city has managed to contain a recent surge in cases after an outbreak at a gym popular with expatriates. The cluster -- the city’s second-biggest of the pandemic -- prompted HSBC to close its main Hong Kong office for a short period. Other firms, including Goldman Sachs Group Inc. and UBS Group AG, also had more of their people work from home.

HSBC has about 30,000 employees in Hong Kong and the city contributed to more than 90% of its adjusted pretax profit last year. Departments operating on a split team basis for contingency purposes will continue to do so until further notice, according to the memo.

Hong Kong is set to ease some border and quarantine measures, including “lifting a ban on travelers from the U.K.” while non-residents from Australia, New Zealand and Singapore, deemed low Covid risk, can soon enter the city, the bank said in the memo.

A spokeswoman at the bank confirmed the contents of the memo.