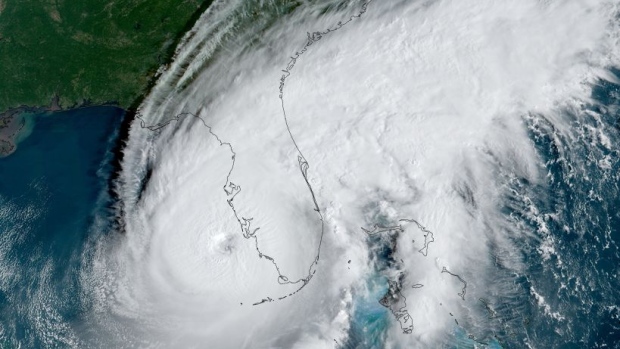 (Bloomberg) -- As Floridians board up their homes and businesses brace for Hurricane Ian’s impact, environmental groups worry there’s one big hazard that’s been left exposed to storm damage: pools and stacks that contain a toxic fertilizer byproduct.

Florida is home to much of America’s production of phosphate fertilizer and Ian’s current trajectory has its sights set east of Tampa, where Mosaic Co. has the bulk of its phosphate facilities. Environmental experts worry the possibility of storm damage poses a serious risk for a toxic spill due to the way phosphate is produced and its byproducts are stored.

“Protecting the environment and the communities around our sites in Florida is a top priority, especially during Hurricane Ian,” a spokesperson for Mosaic said Wednesday by email. “We’ve made many improvements throughout years of Florida storms to help prevent any potential problems.”

The company added that all of its Florida locations “have been secured, with some fully evacuated while minimal staff remain at other sites.”

In the production of phosphoric acid-based fertilizer, a radioactive and toxic byproduct called phosphogypsum is created in large quantities and stored in stacks -- or big mounds -- that can be hundreds of acres wide and hundreds of feet tall.

“If you have lots of flooding, lots of rain, you could see the toxic waste go into our waters just like it did with Piney Point,” said Jaclyn Lopez, an Environmental Law Professor at Stetson University. “The halflife of a phosphogypsum stack’s radioactive decay is 1,600 years, so this is going to be a problem for me, my kids and their kids. With the increasing hurricane strength and frequency, it’s a real big concern for Tampa Bay.”

In 2021, the nearby Piney Point phosphogypsum stack suffered a catastrophic failure due to severe rainfall, causing a red tide that killed approximately 1,600 tons of marine life and forced evacuations in nearby towns.

One concern “is environmental, the impact it might have, because that water is going to flow back in other places,” Florida Republican Senator Marco Rubio said on CNN.

Current production methods cause a lot of vulnerabilities in the event of a major storm, said Ragan Whitlock, staff attorney at the Center for Biological Diversity in St. Petersburg. Hazardous wastewater is stored in large, open-air ponds that can overflow into Tampa Bay if heavy rainfall overwhelms their capacity, he said.

Mosaic said it has made “many improvements” at its sites to help prevent any issues, including creating “a more comprehensive internal dike system to break up ponds of water at the top of Gypstacks and reduce wave action” and has also lowered its standing water level by 25 feet to reduce risk.

“We’re deeply concerned at this point,’ Whitlock said. “We think it has the potential to be a catastrophic issue.”