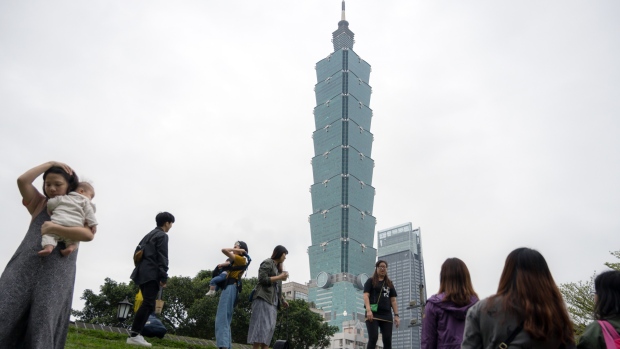 To show off a US$50 million Mark Rothko painting that Sotheby’s plans to sell in New York, the auction house took it to Asia to tempt wealthy bidders. Outside of the company’s regional base in Hong Kong, the artwork made only one stop -- not Shanghai or Tokyo or Singapore, but Taipei.

"We take the art to where the buyers are," said Patti Wong, chairman of Sotheby’s Asia, who hosted a two-day preview attended by Maggie and Richard Tsai and Yageo Corp. chairman Pierre Chen. "The Taiwanese market is hugely important for us."

China may be minting billionaires faster than anywhere else, but Taiwan has been building fortunes since the 1950s. According to Knight Frank’s 2019 Wealth Report, Taipei was eighth in a global list of cities ranked by the number of ultra-high-net-worth individuals, with 1,519 people who have at least US$30 million in assets. And the property firm predicts that number will rise to 1,864 by 2023.

Wealth creation on the island of 23.6 million people took off in the 1970s with the proliferation of hundreds of small manufacturers cranking out everything from televisions to Barbie dolls that fueled Taiwan’s export-led growth. By the 1980s, the city had moved up the value chain, making electronic components and goods, led by computer companies and chip makers such as Acer Inc. and Taiwan Semiconductor Manufacturing Co.

When China began opening to investment, many Taiwanese companies shifted production across the Taiwan Strait to ride China’s industrial boom. New Taipei City-based Foxconn Technology Group made founder Terry Gou a fortune worth US$4.3 billion as of April 1.

Money that flowed back to Taiwan created some startling symbols of wealth. When the Taipei 101 tower opened in 2004, it was the world’s tallest building, eclipsed only in 2010 by Dubai’s Burj Khalifa, and housed Christian Dior’s largest flagship store in the world.

But a good chunk of the money earned by Taiwan’s entrepreneurs stayed abroad. According to a UBS Group AG report, the Taiwanese hold US$500 billion offshore, third behind China, with US$1.4 trillion and the US with US$700 billion.

They’re also fond of real estate. According to Knight Frank, Taiwan’s super-wealthy own an average of 5.4 homes each, compared with just over 4 for Hong Kongers and 4.6 for those in the Middle East. In downtown Taipei, apartments in Belgian architect Vincent Callebaut’s twisted, carbon-eating residential tower, Tao Zhu Yin Yuan, reportedly sell for NT$1 billion (US$32 million) apiece, making them among the priciest in the region.

Much of the wealth on the island belongs to founders who never took their companies public, and some of them are now looking to cash out. Precision Motion Industries Inc., a supplier to the semiconductor industry whose shareholders include Pai Young-yao, is seeking a buyer in a deal that would value the company at US$1 billion, according to people familiar with matter.

"Over 90 per cent of our clients are entrepreneurs with unlisted companies," said Dennis Chen, head of wealth management Taiwan at UBS, which has seen annual double digit growth in the past five years.

Unlike the stereotype of the new wealth portrayed in the film "Crazy Rich Asians," most wealthy Taiwanese families eschew ostentatious displays of riches.

"We are not showy," said art-lover Tsai, who co-heads Fubon Financial Holding Co. with his brother. "Taiwanese learned the importance of modesty from the Japanese and value the traditional Chinese virtue of humility.”

Chen agrees. "Most of our clients never fly business class," he said.

That’s not to say Taiwan’s top 1 per cent don’t know how to enjoy their money, they just do so without fanfare, said Annie Leung, chairman of Bellavita, a luxury mall in the heart of Taipei. The mall has a VIP club with fitting rooms where well-heeled shoppers can try on clothes and pricey jewelry without ever having to enter a store. Hermes even provides generic brown bags to people who don’t want to broadcast their purchases.

"They don’t want to have an obvious orange bag on the street," said Leung, whose father C.C. Leung is co-founder of Quanta Computer Inc. "High-end consumers like to spend their money, but they don’t always like to be seen."