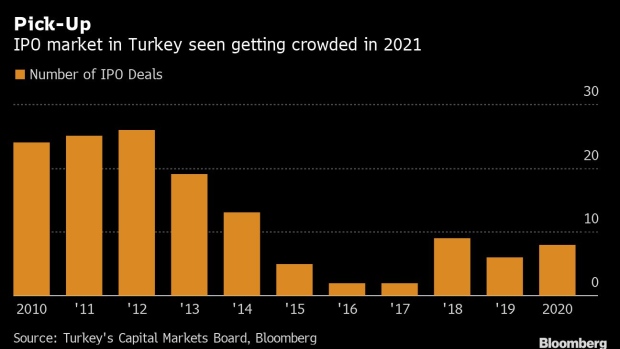 (Bloomberg) -- Aydem Holding AS, which underwent Turkey’s second-largest debt restructuring, applied for an initial public offering of its renewable-electricity producer.

Garanti Yatirim, Is Yatirim, Turkiye Kalkinma ve Yatirim Bankasi AS and Yapi Kredi Yatirim will lead the offering of shares in Aydem Yenilenebilir Enerji AS, according to an emailed statement on Tuesday. Halk Yatirim, Vakif Yatirim and Ziraat Yatirim will act as co-leaders. There is no certainty that the IPO will take place, the company said.

Aydem Holding joins a flurry of small and medium-sized Turkish companies rushing to list on Borsa Istanbul and cash in on a flood of local retail investors. The re-branded company formerly known as Bereket Enerji restructured $5 billion of loans in 2019.

If the IPO materializes, it could be the biggest share sale in Turkey since discount grocer Sok Marketler Ticaret AS raised $595 million in mid-2018. Aydem Holding was expecting to raise around $300 million in an offering that could value the unit at as much as $1.5 billion, people familiar with the plans said late last year.

The company has 25 power plants with a total capacity of 1,020 megawatts, Idris Kupeli, chief executive of Aydem, said in the statement. “In 2021, we are increasing hybrid energy production plants in a bid to diversify our portfolio,” he said.