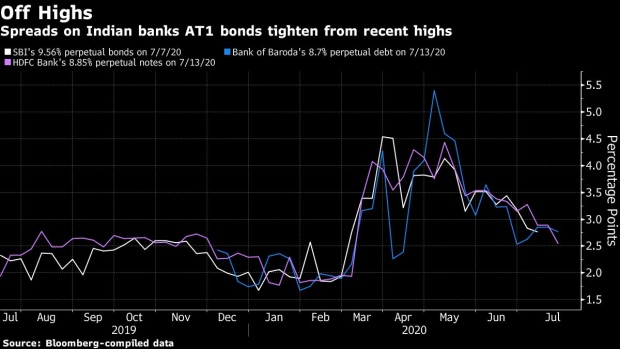 A worker pushes a cart past a Bank of Baroda (BOB) branch in Delhi, India. , Bloomberg

(Bloomberg) -- One of India’s largest state-run lenders is planning to sell a riskier type of bank bond this week, in the first sale of such debt since local authorities permanently wrote down similar securities of a rival.

Bank of Baroda is seeking bids on Wednesday for as much as 20 billion rupees ($266 million) of local-currency perpetual Additional Tier 1 notes, according to people familiar with the matter, who aren’t authorized to speak publicly and asked not to be identified. The Reserve Bank of India rocked local markets in March when it seized competitor Yes Bank Ltd. and wrote down the lender’s 87.8 billion rupees of AT1 bonds, a first in the nation.

Bank of Baroda’s sale will be closely watched as an indicator of investor demand for the riskier debt that can be written down in a crisis, with peers including Canara Bank and Bank of Maharashtra also planning such offerings. Local banks are saddled with the world’s worst bad debt pile and need to beef up capital buffers in anticipation of more soured loans as the coronavirus batters businesses and leaves millions jobless.

The central bank in May cut local benchmark interest rates to the lowest since at least 2000 to tackle the fallout from the pandemic and a lockdown to contain it. Such moves by the RBI and huge government stimulus have helped boost investor appetite for riskier debt, and issuance of corporate notes graded A+ and lower rose to a 15-month high in June.

In January, South Indian Bank raised 5 billion rupees through AT1 bonds, making it the lone issuer for such debt offerings this year, according to data compiled by Bloomberg. Banks had sold perpetual debt amounting to 130.6 billion rupees in 2019.

While Bank of Baroda has AAA credit scores from local credit companies, its AT1 offering is rated AA+ and can be called back by the lender after five years or any year thereafter.

“The rating on Bank of Baroda’s AT1 bonds reflects the bank’s strong standalone credit profile, along with its ability to service coupons and manage principal write-down risk,” India Ratings & Research, the local affiliate of Fitch Ratings, said last week. It cited a high probability of support from its majority owner, the Indian government, if required.

State Bank of India, the country’s largest lender, will also consider a proposal to issue capital bonds on Wednesday. India’s lenders need to raise $20 billion of capital over the next year, of which state banks will require $13 billion, to build up cash cushions, Credit Suisse Group AG estimated in a report in May.