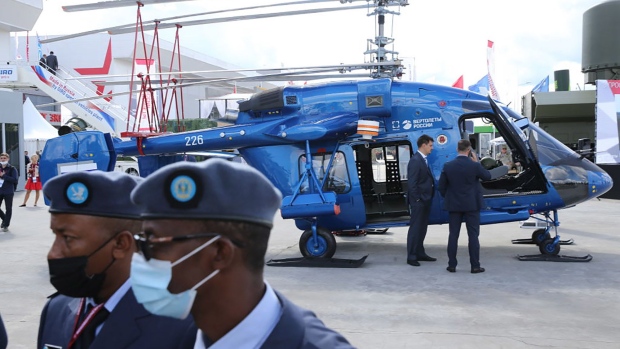 (Bloomberg) -- India won’t go ahead with building Russian helicopters locally under a $1 billion deal when President Vladimir Putin visits New Delhi next week, according to senior government officials with knowledge of the matter, complicating plans to modernize the world’s third largest military force.

Instead, there might be off-the-shelf purchases of some of the Ka-226T military choppers as the Indian Air Force needs to make immediate replacements to its fleet of over 320 aging helicopters. The military is currently fortifying its western and northern borders as tensions with China fester.

India initially inked the deal in 2015 with the Russians for 200 of the Kamov twin-engine utility helicopters. Of this, 60 choppers were to be imported and the remaining would be manufactured locally under a venture between the Bengaluru defense public sector unit, Hindustan Aeronautics Limited and Russian Helicopters.

However, the Kamov project had very few backers within a government that was keen on boosting the local defense manufacturing under Prime Minister Narendra Modi’s “Make-in India” initiative, one of the senior officials said. Also, helicopters with coaxial rotors like the Kamov are costlier to maintain in comparison to the traditional ones, the official said.

India’s earlier talks with the Russians on using more locally-manufactured parts were inconclusive and HAL had since developed a light utility helicopter similar to the Kamov, the officials said, asking not to be named citing rules for speaking to the media.

New Delhi has gone ahead with ordering 12 helicopters from HAL. These choppers have cleared most of the field tests and will come under a limited series production, the officials said, just as the Karnataka-based manufacturing plant gets online.

Over 70% of India’s military helicopters are three decades old with the rest in service for almost 50 years, often requiring refitting and maintenance. The Indian army is now making do with just three-quarters of the fleet for reconnaissance and observation, a senior military officer said on the condition of anonymity.

The latest accident involving these choppers was in September when a Cheetah helicopter crashed in Jammu and Kashmir, killing two pilots. In the last decade, as many as 19 personnel have died in such incidents.

The bulk of these light utility helicopters are used also for casualty evacuations, ferrying men and hardware to the Himalayas. Most have to be decommissioned from 2023.