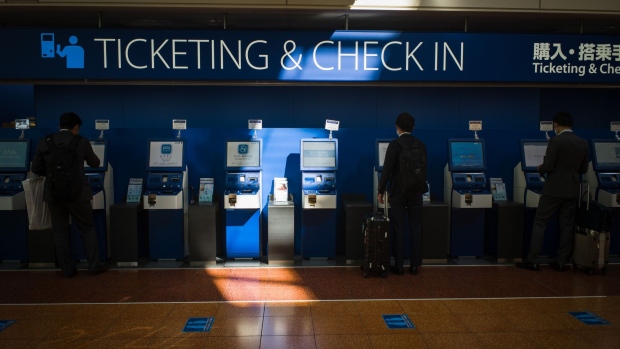 ANA aircraft are attached to tugs at Haneda Airport in Tokyo. , Bloomberg

(Bloomberg) -- ANA Holdings Inc. forecast its biggest-ever operating loss of 505 billion yen ($4.8 billion) for the fiscal year through March 2021, the latest global airline to face an existential threat to its business due to the pandemic.

The Japanese carrier also unveiled a restructuring plan along with its quarterly results. ANA will target 150 billion yen in cost reductions in the current fiscal year, dispatch hundreds of employees to other companies and sell aircraft. Analysts were projecting, on average, an operating loss of 376 billion yen for the year, according to estimates compiled by Bloomberg.

The $838 billion global airline industry is set to see revenue slashed by half this year, with carriers cutting jobs and securing funding to ride out the crisis. ANA, Japan’s largest carrier, is suffering from a steep drop in domestic and international passenger traffic, and is planning to secure about 400 billion yen in subordinated loans to keep operations afloat.

“Both JAL and ANA hold enough liquidity to last at least through this fiscal year,” said Bloomberg Intelligence analyst James Teo. More could be done to rationalize ANA’S fleet to better match reduced demand, and the airline could consider further revising the salary structures of pilots and staff, he said.

ANA shares fell 3.2% before the results and restructuring plan were released. The stock is down 37% this year.

ANA also issued an outlook for 740 billion yen in revenue for the fiscal year through March, compared with analysts’ average prediction for 926 billion yen.

The carrier is set to receive the subordinated loans from five lenders, including Sumitomo Mitsui Financial Group, Mizuho Financial Group and the government-backed Development Bank of Japan. Nikkei reported last month that ANA was considering raising 200 billion yen via a public share offering.

For the latest quarter, ANA reported an operating loss of 122 billion yen, compared with the average estimate for a 115 billion yen loss, on revenue of 170 billion yen.

Japan, which delayed its plan to hold the Olympics this summer for a year, had prepared for a massive tourism boost, building hotels and redeveloping urban areas. But global passenger traffic won’t return to pre-pandemic levels until 2024, according to the International Air Transport Association. Overseas visitors to Japan fell 99.4% in September from a year earlier as the country largely kept its borders shut.

The Go To campaign aimed at supporting domestic travel demand has helped but local demand is far from fully recovered. ANA and Japan Airlines Co. are both forecasting domestic passengers to drop by about 50% this month.

Although events such as natural disasters and epidemics are inevitable for the aviation industry, carriers probably didn’t expect the impact of coronavirus to be this big , said Shunsuke Oshida, a credit analyst at Manulife Asset Management.