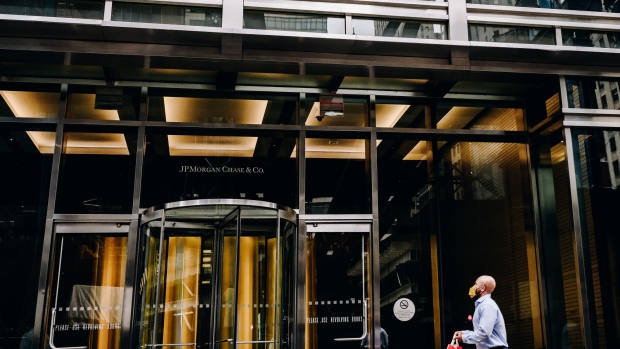 A pedestrian wearing a protective mask walks by the JP Morgan Chase & Co headquarters in New York, U.S., on Monday, June 14, 2021. On Tuesday, Governor Andrew Cuomo lifted New York state’s pandemic mandates effective immediately, saying that 70% of the adult population has now been given at least one dose of a coronavirus vaccine. , Bloomberg

(Bloomberg) -- JPMorgan Chase & Co. made sweeping improvements to time off for bereavement, sick days, and caring for ill family members -- including for the first time giving 16 weeks of leave to either parent for the birth or adoption of a child, regardless of which is the primary caregiver.

The changes put the bank more in line with parental leave already offered at Goldman Sachs Group Inc. and Bank of America Corp. JPMorgan will increase sick days for full-time employees to 10 days from six and bump bereavement to 20 days from 5 for the loss of a spouse, domestic partner or child, or in the case of a stillbirth or miscarriage, according to a copy of an internal memo sent to employees Thursday.

Under a new policy, employees will be eligible for up to four weeks paid time off to care for a seriously ill spouse, domestic partner, child or parent. The new benefits start Jan. 1.

Even amid layoffs and the threat of an economic slowdown, employers have focused on retaining key workers and are seeking to attract new employees to harder-to-fill roles. During the pandemic, boosting parental and family leave became a popular perk. The Society for Human Resource Management found in its 2022 study that most companies are maintaining or improving those benefits even as some workers return to the office.

Bank of America offers 10 paid sick days and 20 days for bereavement leave, as well as unpaid leave to care for ill family members. The lender also allow as much as six weeks of paid sabbatical for longtime workers.

JPMorgan agreed in 2019 to pay $5 million to resolve a discrimination claim filed by a male employee who alleged the bank’s parental-leave policy was biased against dads. The payout resolved a 2017 complaint brought by the American Civil Liberties Union alleging bias. JPMorgan didn’t admit liability in the settlement. The bank had no additional comment on the case Thursday.

--With assistance from Kelsey Butler.