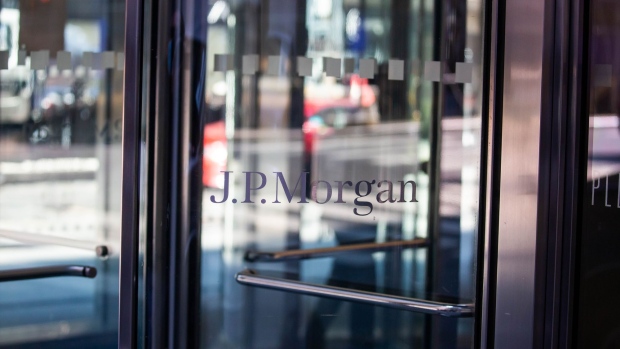 Signage is displayed at JPMorgan Chase & Co. headquarters in New York, U.S., on Monday, Sept. 21, 2020. JPMorgan CEO Dimon has made the case for a broader return, saying his firm has seen "alienation" among younger workers and that an extended stretch of working from home could bring long-term economic and social damage. Photographer: Michael Nagle/Bloomberg , Bloomberg

(Bloomberg) -- The precious-metals business at JPMorgan Chase & Co. operated for years as a corrupt group of traders and sales staff who manipulated gold and silver markets for the benefit of the bank and its prized clients, a federal prosecutor told jurors in Chicago.

“This case is about a criminal conspiracy inside one of Wall Street’s largest banks,” said Lucy Jennings, a prosecutor with the Justice Department’s fraud section. “To make more money for themselves, they decided to cheat.”

The trial of three former JPMorgan employees, including the veteran head of precious metals, Michael Nowak, is the most ambitious effort yet in a years long US crackdown on market manipulation and spoofing. Unlike past cases of alleged trading fraud, the trio is accused of a racketeering conspiracy under the 1970 Racketeer Influenced and Corrupt Organizations Act -- a criminal law more commonly used against the Mafia rather than global banks.

Nowak, gold trader Gregg Smith and Jeffrey Ruffo, an executive director who specialized in hedge fund sales, are charged with racketeering conspiracy as well as conspiring to commit price manipulation, wire fraud, commodities fraud and spoofing. All together, Nowak and Smith have been accused of more than two dozen crimes. The three defendants face decades in prison if convicted on all counts. Another trader, Christopher Jordan, who was charged alongside them, is scheduled to go to trial in November.

Spoofing, banned by law in 2010, involves huge orders that traders cancel before they can be executed in a bid to push prices in the direction they want to make their genuine trades profitable. While canceling orders isn’t illegal, it is unlawful as part of a strategy intended to dupe others.

“When this trick works, there is somebody else on the other side of the deal that lost,” Jennings told jurors. “Somebody got ripped off.” She added, “We will prove that all three defendants knew from day one that this trading was wrong and did it anyways.”

Lawyers for Nowak, Smith and Ruffo have argued that the transactions the government called spoofing were actually “real, executable, open-market orders,” according to court filings. Even so, they said at the time of the alleged spoofing, there was no related guidance or fair notice that such conduct could be considered fraudulent. Without a pattern of fraudulent activity, there can be no RICO conspiracy, they’ve argued, adding that the racketeering charge in this case bears no resemblance to ones brought in traditional organized crime prosecutions.

Jennings said electronic communications and other evidence will show how the three intended to make sure their trading impacted markets in their favor. She said the government will call upon former traders who worked under Nowak or with the defendants. That includes John Edmonds, a former JPMorgan trader who previously pleaded guilty on charges linked to price manipulation.

Another likely witness for the government is Corey Flaum, who worked with Smith and Ruffo at Bear Stearns before it was acquired by JPMorgan during the financial crisis. Flaum pleaded guilty in 2019 to attempted price manipulation.

Following opening statements, the Justice Department said its first witness is likely to be John Scheerer, who will testify on the Chicago Mercantile Exchange’s operations and futures markets mechanisms.

Prosecutors allege Smith and Ruffo brought their illicit trading tactics from Bear Stearns to JPMorgan and their trading strategy was quickly adopted by Nowak and others. The Bear Stearns traders’ twist was to place multiple orders, at different prices, that in aggregate were substantially larger than the genuine order -- a technique the government calls layering. The orders, made in rapid succession after the genuine order, would be canceled as soon as the genuine order was filled.

Smith, a lead gold trader, executed some 38,000 layering sequences over the years, or about 20 a day, prosecutors said in filings. Nowak himself primarily traded options, but he would dip into the futures market to hedge those positions. He tried his hand at layering in September 2009, according to filings, and went on to use the technique some 3,600 times.

While some of the transactions started before lawmakers banned spoofing, the tactic allegedly continued to be widespread with the JPMorgan traders engaging in spoofing more than 50,000 times in almost a decade.

Ruffo, meanwhile, is alleged to have told Smith where he needed the market in order to fulfill orders involving at least two of his hedge fund clients -- Moore Capital Management and Tudor Investment Corp., according to court filings. Lawyers for Ruffo and the others said they may call traders from those hedge funds as well as one from Soros Fund Management to testify about transactions. Their witness list also includes six current and former JPMorgan sales staff on the precious metals desk -- two of whom supervised Ruffo.

The government crackdown by the Justice Department and the US Commodity Futures Trading Commission has nabbed more than two dozen individuals and firms, from day traders operating out of their bedrooms to sophisticated high-frequency trading shops and big banks including Bank of America Corp. and Deutsche Bank AG.

Not every case was successful. In 2018, a jury acquitted former a UBS Group AG trader of conspiring to engage in commodities fraud, and in 2019, a case against a Chicago programmer who created spoofing software ended in mistrial and charges were dropped. In the JPMorgan case, bank fraud charges against the three defendants were thrown out by the judge.

Still, the government has had many more wins. Two former precious-metals traders at BofA’s Merrill Lynch were found guilty of spoofing by a jury in Chicago last year, and in 2020, two Deutsche Bank AG traders were convicted.

In September 2019, JPMorgan admitted wrongdoing and agreed to pay more than $920 million to resolve US claims of market manipulation in both precious metals and Treasuries. It was the largest ever sanction against a bank over spoofing by a wide margin. JPMorgan also agreed to help the Justice Department prosecute its former employees.