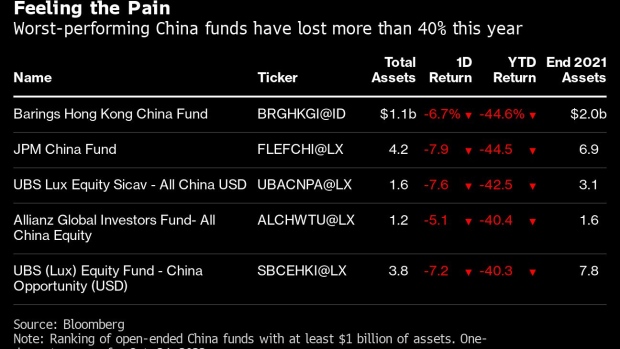 Buildings are reflected in a window in Beijing, China, on Monday, Oct. 24, 2022. China's yuan weakened and the country’s stocks tumbled in Hong Kong to the lowest level since the depths of the 2008 global financial crisis, a stark rebuke of President Xi Jinping's move to stack his leadership ranks with loyalists. Bloomberg , Bloomberg

(Bloomberg) -- Large China-focused funds managed by the likes of JPMorgan Chase & Co. and UBS Group AG are having a terrible year, which just got worse after President Xi Jinping’s consolidation of power dealt a fresh blow to markets this week.

Five of the worst-performing China funds with assets of at least $1 billion have lost at least 40% this year, according to data compiled by Bloomberg. Their combined assets have shrunk by 44% from the end of 2021.

The numbers show how international investors are feeling the pain as China’s regulatory tightening, Covid restrictions, geopolitical tensions and most recently the leadership reshuffle brought waves of selloffs of the nation’s securities.

Read how Allianz is betting on China’s reopening

Fear that further government moves would stifle the economy and private enterprise touched off a 14% slump of the Nasdaq Golden Dragon China Index on Monday, the worst on record, after triggering the steepest decline of the Hang Seng China Enterprises Index since the 2008 global financial crisis.

The latter, a gauge of Chinese companies listed on Hong Kong’s exchange, is the worst-performing major stock index tracked by Bloomberg globally this year, with its loss nearly twice that of the S&P 500 Index. The MSCI China Index has dropped 42% in 2022.