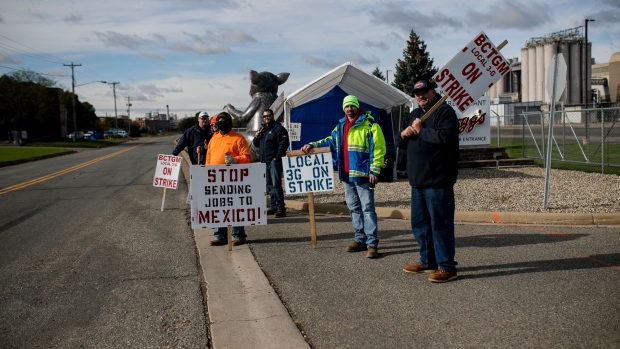 Demonstrators hold signs during a union workers strike outside the Kellogg plant in Battle Creek, Michigan, U.S., on Friday, Oct. 22, 2021. Members of the Building and Construction Trades Council union will return to work Tuesday at the Kellogg Co. cereal factory in Omaha, Nebraska, while the broader strike against the company continues. , Bloomberg

(Bloomberg) -- Kellogg Co. called on the union at its cereal plants to resume negotiations and said it’s willing to consider new proposals as a workers’ strike is poised to stretch into its fourth week.

The company said it sent an email to leaders of the Bakery, Confectionery, Tobacco Workers and Grain Millers International Union stating it’s willing to discuss the two-tier employment system that separates between “transitional” and “legacy” workers. Changes to that system have been a sticking point from the company’s initial proposal.

“The company is willing to consider any proposals from the union, including proposals that would preserve a pathway for transitionals to legacy wages and benefits,” Kellogg said in a statement to Bloomberg about the content of the message to union leaders. The company declined to elaborate further.

Kellogg proposed eliminating that transitional concept, according to a summary of their contract offer that was included in a lawsuit the company filed earlier this month against the union. Under that proposal, the company would instead offer “immediate” pay increases for transitional workers based on years of service.

The union has said this new system, while it would offer higher pay in the short term, would keep workers from reaching full legacy compensation. Kellogg has disputed this characterization.

Dan Osborn, local president of the Omaha, Nebraska, chapter of the BCTGM, said “the union is definitely willing and ready to negotiate in good faith, absolutely.” When told of Kellogg’s latest message, he said “that sounds like we’re headed in the right direction.”