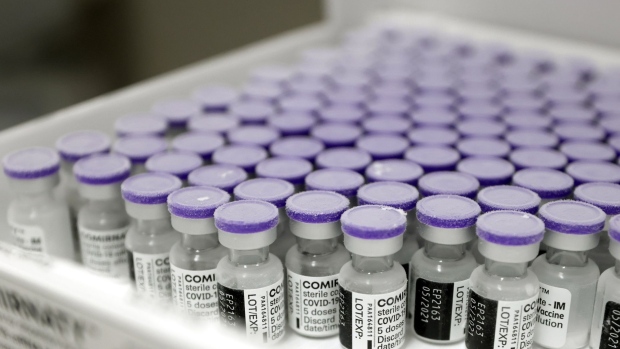 Vials of the Pfizer-BioNTech Covid-19 vaccine in a box at Kanto Rosai Hospital in Kawasaki, Kanagawa Prefecture, Japan, on Thursday, March 4, 2021. , Bloomberg

(Bloomberg) -- Kenya approved the emergency use of Johnson & Johnson and Pfizer Inc. Covid-19 vaccines, said Fred Siyoi, chief executive officer of the Pharmacy and Poisons Board.

The East African nation expects to receive 13 million J&J doses starting this month. Kenya’s plan to inoculate its entire adult population of 26 million people by end of 2022 is reliant on J&J vaccines. About 10 million people will be vaccinated by the end of December, President Uhuru Kenyatta said last month.

Kenya has so far inoculated less than 2.5% of its population of approximately 53 million people, using mostly doses from AstraZeneca.

The nation is battling a surge in cases after the positivity rate hit 18% in July and authorities warned of a shortage of oxygen and scarcity of hospital beds in the capital, Nairobi. Health Secretary Mutahi Kagwe lask week annouced the suspension of public gatherings and said a night curfew will remain in force.