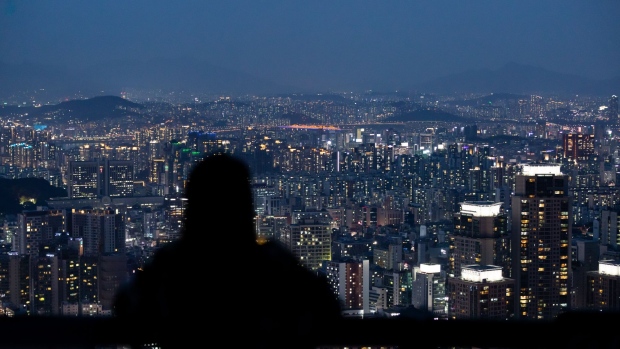 A woman is silhouetted as she looks at a city skyline from an observation deck of Woomyeon mountain at dusk in Seoul, South Korea, on Thursday, July 9, 2020. South Korea’s government is preparing new regulations to curb excessive house price gains that have fueled public discontent over inequality and property speculation. Photographer: SeongJoon Cho/Bloomberg , Bloomberg

(Bloomberg) -- South Korea’s financial regulators are looking into a Hong Kong-based hedge fund that has halted withdrawals from some of its funds by Korean investors, according to people familiar with the matter.

The Financial Supervisory Service is reviewing the suspension of client redemptions totaling at least 647 billion won ($536 million) by Gen2 Partners Ltd., founded by Kyle Shin, the people said. The frozen funds are part of Gen2’s KS Asia Absolute Return Fund, KS Korea Credit Fund and CM Credit Fund, according to the people, who are not authorized to speak publicly on the matter.

Several distributors of the funds in Seoul have received notifications on the suspension of withdrawals. The Korean financial watchdog is trying to reach Shin for details on the current situation and it may seek cooperation of local authorities in Hong Kong if it fails to talk to him, said one of the people.

Korean investors’ combined exposure to funds run by Gen2 Partners was around 1.08 trillion won, according to an official at the FSS. Local media including Yonhap News reported earlier on the withdrawal halt of Shin’s funds.

Korean regulators, burned by scandals tied to complicated and risky financial products, are planning to look at all of the nation’s homegrown asset management companies handling private funds. The pandemic-driven market volatility has also made investments more difficult, leading to at least $62 billion of global mutual funds suspending redemptions this year as of end-May, already at the highest in 10 years, Fitch Ratings said in a report last month.

One of Gen2’s portfolios earned a 48% return in 2017 betting on risks related to North Korea by trading South Korean sovereign credit-default swaps. It gained 20% in the first quarter of 2018 with swap trades wagering on the U.S. Federal Reserve’s rate hike.