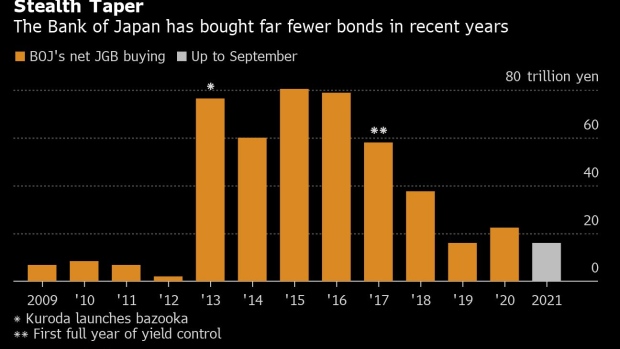 Haruhiko Kuroda, governor of the Bank of Japan (BOJ), at the central bank's headquarters in Tokyo, Japan, on Thursday, May 27, 2021. BOJ will consider climate change in its monetary policy discussions, Kuroda said in his clearest signal yet that the central bank is looking to support the battle against global warming. , Bloomberg

Haruhiko Kuroda is poised to become the Bank of Japan’s longest-running governor at the end of this month, testimony to his ability to keep political and market pressure at bay despite the failure of his unprecedented monetary experiment to spark inflation. When Kuroda took the helm in March 2013, then Federal Reserve Chair Ben Bernanke was fretting over plans to taper bond buying. Mario Draghi at the European Central Bank was saving the euro with “whatever it takes” and Mark Carney was still months away from joining the Bank of England.

Kuroda has learned from and outlasted them all. When Covid-19 shuttered huge swathes of the global economy early last year, many of his pioneering policies were adapted by the latest generation of central bankers to keep businesses from failing and help lower borrowing costs for record government stimulus.

During this span, he has evolved from a quantitative easing idealist to a policy-tinkering realist. In particular, his grand vision of achieving 2% inflation in around two years is a distant memory, with even the BOJ’s own forecasts showing it’ll fall to his successor to reach that mark.

That recognition has seen him switch from full-bore bond buying to a more efficient stimulus approach that targeted yields, prompting studies by the Fed and the European Central Bank and its adoption by the Reserve Bank of Australia.

To his detractors, he’s recklessly racked up assets in a futile pursuit of price growth, leaving officials below him at the central bank with the job of clearing up the mess when problems emerge. He’s hooked the government on cheap debt, warped markets, squeezed banks and created financial risk for the BOJ as its mountain of purchases soared to more than 130% the size of the economy, critics say. Still, candidates vying to replace Yoshihide Suga as prime minister of Japan in the coming weeks will be looking to rely on the BOJ’s helmsman just like their predecessors. For the new leader, Kuroda will be an economic and climate policy ally who can stay on message and keep investors calm even when the central bank is changing track behind the scenes.

“He has used all the tools in the arsenal, including new ones, to help sustain demand and growth,” said Olivier Blanchard, former chief economist at the International Monetary Fund. “This was not quite enough to get inflation back up, but this is the most the BOJ could do.”

Before Kuroda reaches his landmark on Sept. 29, he will hold a policy meeting this week where he’s expected to keep the main stimulus settings unchanged and offer more details of the BOJ’s new lending program to support companies battling climate change. His milestone comes on the day Japan’s ruling party picks a new leader.

Of the four declared candidates, vaccine czar Taro Kono is the public’s preferred choice for prime minister. Kono has shown a reluctance to focus on prices, but would likely put any possible rethink of inflation targeting or monetary easing on the back burner as he zooms in first on pandemic recovery and administrative reform.

None of the candidates would likely risk upsetting markets by shaking up the BOJ when the economy is still struggling to recover amid an ongoing state of emergency. That suggests Kuroda can keep talking about massive and persistent BOJ stimulus even as the central bank continues to scale back its measures through more strategic use.

Kuroda’s green funding move has meanwhile given them another reason to let him see out his term to spring 2023. By driving the bank to roll out the lending facility, Kuroda has aligned himself with a key national goal of turning the world’s third-largest economy carbon neutral by 2050 -- a target that is shared by all the candidates.

One of the key reasons Kuroda is still around is that BOJ stimulus has done plenty to keep politicians and investors happy. Through massive asset buying and interest rate control, the bank has helped weaken the yen, boost corporate profits, prop up the stock market and keep the government’s over-sized borrowing costs down.

These positives gave the Abenomics growth strategy of former Prime Minister Shinzo Abe a successful veneer. Kuroda’s habitual talking up of stimulus power and his readiness to act have also removed much of the political pressure that BOJ officials felt before his arrival.   Still, the impact of Abenomics has left some heavyweights in the ruling party feeling uneasy. Former foreign minister and LDP leadership candidate Fumio Kishida has hinted that growing inequality in Japan partly stems from asset holders benefiting from the central bank’s buying binge.

“We shouldn’t be congratulating him just because he’s gonna be the longest serving governor,” said Mari Iwashita, chief market economist at Daiwa Securities. “Kuroda has done things that cross the Rubicon so many times. If you launch a massive easing campaign you should also be the one to tidy it up before you leave office.”

The negative side effects on markets and banks have driven a discreet winding back of some of his stimulus that stretches back to 2016, dividing Kuroda’s tenure at the bank into two phases. Both periods draw on measures designed by the bank’s technocrats including Masayoshi Amamiya, now deputy governor. After three years of the bazooka-sized purchases that launched Abenomics, Kuroda realized that bonds alone couldn’t buy inflation. He then rattled markets with a surprise shift to negative interest rates, before settling on yield curve control in September 2016.

That was a solution that limited bond buying to an amount sufficient to keep 10-year yields around zero. Even during the pandemic year of 2020, the BOJ’s net bond purchases only came to 22.4 trillion yen ($204 billion), little more than a quarter of Kuroda’s earlier target of 80 trillion yen.

Meanwhile, ramped-up buying of exchange-traded funds had a more direct impact on stock indexes -- and with a cheaper initial price tag around the 6 trillion yen mark.

Further tweaks to scale back asset buying came in July 2018 and March this year without a single mention of the word ‘taper’ as Kuroda highlighted greater nimbleness and sustainability to avoid any tantrums in markets.

Still, while the rest of the world frets about inflation, prices have been falling again in Japan since spring 2020. And unless he can work with Japan’s next leader to generate some price momentum in the twilight of his term, that’ll be an inescapable part of his legacy.

“Governor Kuroda pioneered some innovations, such as yield-curve control. But they were not fully effective,” said Maurice Obstfeld, another former chief economist at the IMF. “The best one can say is that things could have been worse.”