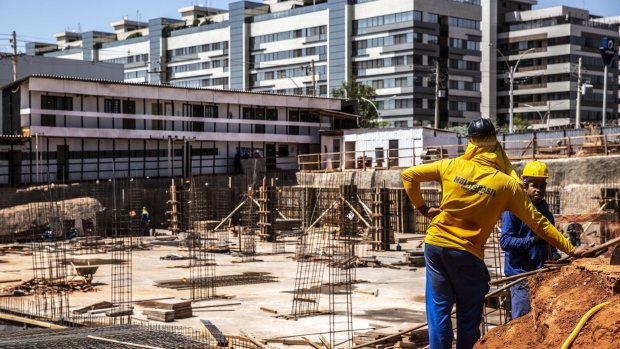 Residential and commercial buildings under construction in Brasilia, Brazil, on Tuesday, Aug. 31, 2021. Brazil’s economy contracted in the second quarter, with fiscal concerns and an energy crisis weighing on the outlook for growth. Photographer: Dado Galdieri/Bloomberg , Bloomberg

The region is forecast to have expanded 0.2% in the fourth quarter as a positive performance by smaller economies more than offset a recession in Brazil and a near-stagnant Mexico, the research firm said Friday in a report.

“Strong growth in Chile and Colombia should prevent a regional contraction,” economists Joan Domene and Felipe Camargo wrote in the report.

Latin American economies are losing steam as most governments withdraw fiscal stimulus and central banks raise interest rates to fight above-target inflation. Such headwinds are cutting short the region’s post-pandemic recovery even as businesses reopen amid progress in vaccination campaigns.

Yet the growth mismatch between the region’s bigger and smaller economies didn’t reflect in the performance of their foreign exchange market late last year, Oxford Economics said, noting that all currencies experienced generalized weakness.

“The increasingly hawkish tone of the U.S. Federal Reserve since the start of the year and the market’s pricing of an aggressive normalization cycle there could spark new episodes of financial volatility in the region,” it warned.