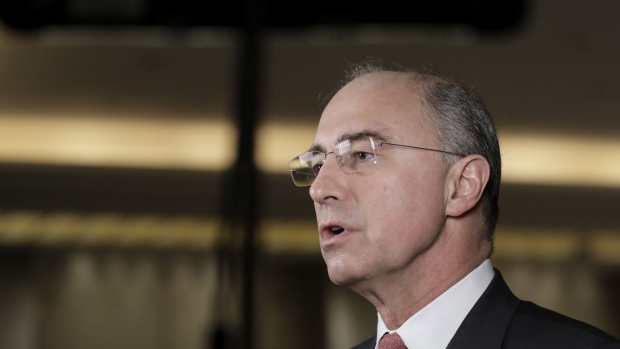 Xavier Rolet, chief executive officer of CQS UK LLP, speaks during a Bloomberg Television interview at the Milken Institute Japan Symposium in Tokyo, Japan, on Monday, March 25, 2019. As sovereign bonds around the world continue their relentless climb and a closely watched segment of the U.S. yield curve inverts -- seen as a harbinger of recession -- the level of anxiety about the global economy can’t be understated. For hedge fund CQS, that caution has gone a bit too far, according to Rolet. , Bloomberg

(Bloomberg) -- The U.K. government should move quickly to embrace blank-check firms and cryptocurrencies to help the City of London flourish in the post-Brexit era, according to a paper co-authored by Xavier Rolet.

There’s been a rush by investors into such vehicles -- formally known as special purpose acquisition companies -- in the U.S. SPACs raised a record $39 billion during the fourth quarter, more than 10 times the same period in 2019. But U.K. regulations have hindered their popularity on the London markets.

Other opportunities include digital currencies. “All the relevant U.K. government agencies should be resourced to thoroughly understand cryptocurrencies,” the report said. Regulation should be enacted to “place London and the U.K. at the center of a reputable and safe financial market.”

The paper also called for London to align regulatory control with the capital markets of the U.S. and China and move quicker than the European Union when it comes to changing regulations.

But that divergence may conflict with another item on the wishlist: the maintenance of close financial connections with the European Union. The report noted agreement with the bloc on derivatives and foreign exchange trading as well as clearing is vital to protecting London’s status as a financial center.

That may prove optimistic -- so far there’s been little progress on such agreements and the EU has made it clear divergence from its rules won’t help London’s cause.