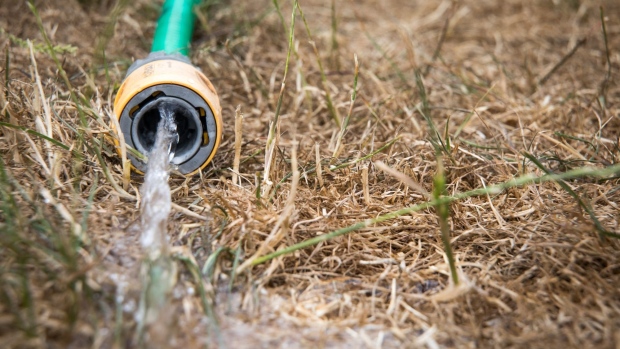 TONBRIDGE, UNITED KINGDOM - AUGUST 05: A dried up body of water that usually runs into Bough Beech Reservoir on August 05, 2022 in Tonbridge, United Kingdom. Bough Beech is currently showing as 'below average', according to SES Water, (Sutton and East Surrey Water plc) who manage the reservoir. Hosepipe bans have been issued in parts of the south including Hampshire, which comes into force today, and Kent, which comes into force on 12, August. (Photo by Dan Kitwood/Getty Images) , Photographer: Dan Kitwood/Getty Images

(Bloomberg) -- Londoners have been told to prepare for a hosepipe ban as the city faces another heat wave.

Thames Water, the utility that serves London, said it couldn’t confirm exactly when the ban would kick in but urged families to use as little water as they need to get by.

“Given the long-term forecast of dry weather and another forecast of very hot temperatures coming this week we are planning to announce a temporary use ban in the coming weeks,” a spokesperson for Thames Water said.

The UK’s Health Security Agency has extended a heat-health alert that started on Tuesday for all regions until 11 p.m. on Aug. 14, while the Met Office has warned of extreme heat particularly in London and the southeast region. England registered its driest July in almost 90 years.

South East Water Ltd. is set to impose a hosepipe and sprinkler ban on customers in Kent and Sussex from Aug. 12 until further notice, the company said last week. The restrictions on hosepipes to water gardens, clean cars and fill swimming pools follow similar moves from Southern Water in Hampshire and on the Isle of Wight.

Water companies have been widely criticised over the amount of leaks in the system. Early on Monday morning a 36-inch pipe burst in north London, flooding streets and holding up traffic while leaving thousands of homes without water. Thames Water sealed the leak by the late morning.

Temperatures are expected to reach mid-30 degrees Celsius (95 degrees Fahrenheit) on Friday in London and across much of the country, the UK health agency said. Intense heat in the UK last month sparked fires in and around the capital, warped runways at airports and triggered warnings that railway lines could buckle.

(Adds context of leaks in sixth and seventh paragraphs)