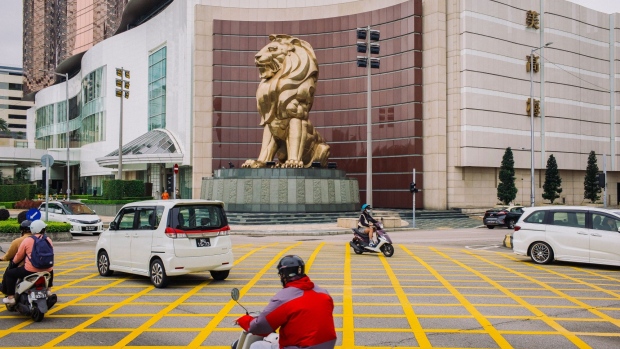 Vehicles moves past a lion statue outside the MGM Cotai casino resort, operated by MGM China Holdings Ltd., in Macau, China, on Tuesday, March 3, 2020. Casinos in Macau, the Chinese territory that's the world’s biggest gambling hub, reported a record drop in gaming revenue, as they grappled with the cost of closing down their businesses for 15 days to help contain the deadly coronavirus outbreak. Photographer: Billy H.C. Kwok/Bloomberg , Shirley Zhao

Gross gaming revenue dropped to 2.96 billion patacas ($366 million), according to data released by the Gaming Inspection and Coordination Bureau. The results were in line with the median analyst estimate of a 50% year-on-year decline, extending a slump that started in March.