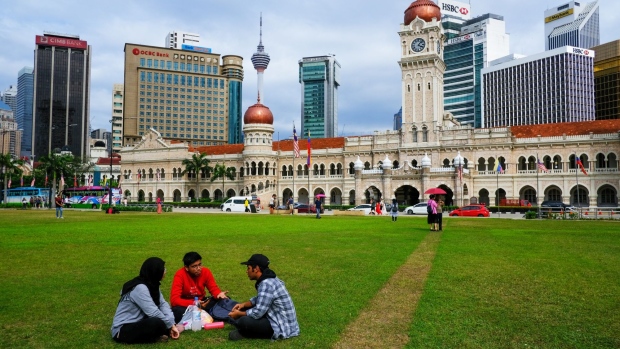 People sit on the lawn in front of the Sultan Abdul Samad building in Kuala Lumpur, Malaysia, on Monday, Jan. 6, 2020. Ringgit is poised for its first advance in three sessions, after overseas investors scooped up Malaysian stocks and the risk-off mood in global markets eased. Photographer: Samsul Said/Bloomberg , Bloomberg

(Bloomberg) -- Malaysia is reviewing its framework for special purpose acquisition companies, or SPACs, amid a surge in demand for such fundraising vehicles globally, according to the nation’s markets regulator.

The popularity of blank-check companies, which raise money from investors with a plan to acquire another company, has exploded over the past year as they offer businesses a quick route to a listing. In Asia, Malaysia’s AirAsia Group Bhd. is exploring the possibility of listing its AirAsia Digital or AirAsia SuperApp in the U.S. this year.

The review is part of the Securities Commission’s five-year plan, which aims to make Malaysian markets more relevant and efficient. The move comes weeks after Singapore and Hong Kong introduced rules for blank-check companies to list in Asia’s main financial hubs.

The review is being conducted “amid developments in other markets,” according to a technical briefing conducted by the SC on Monday. Still, the commission said it would take a cautious approach to SPACs as the framework set by other market regulators may not be “directly transportable” to the Malaysian market.

Malaysia launched its first SPAC in 2011, with the listing of Hibiscus Petroleum Bhd. The shares of the oil and gas company have risen about 8% this year, versus the 6% decline in the nation’s main equities index.

Separately, Finance Minister Zafrul Abdul Aziz said the Dana Penjana Nasional program has invested in another unicorn Xendit. The fintech startup plans to relocate its financial hub to Malaysia, he said at the launch of the capital market master plan on Tuesday.

Dana Penjana Nasional program is a matching fund-of-funds plan under Malaysia’s Short-Term Economic Recovery Plan. It has previously invested in Carsome Group, which runs an online platform for buying and selling used cars.

Other highlights from the master plan: