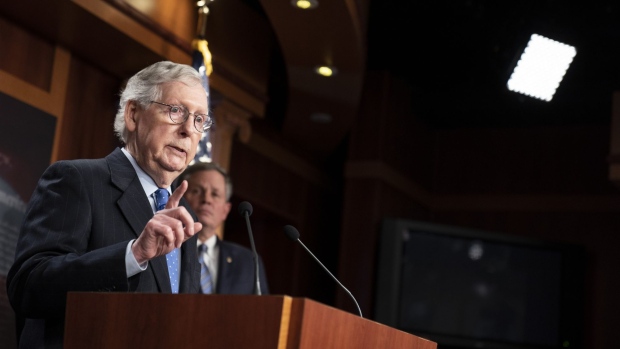 Senate Minority Leader Mitch McConnell, a Republican from Kentucky, speaks during a Senate Rules Committee Hearing on the For The People Act in the Russell Senate Office Building on Capitol Hill in Washington, D.C., U.S., on Wednesday, March 24, 2021. Two mass shootings in one week are giving Democrats new urgency to pass gun control legislation, but opposition from Republicans in the Senate remains the biggest obstacle to any breakthrough in the long-stalled debate. Photographer: Sarah Silbiger/Bloomberg , Bloomberg

(Bloomberg) -- Senate Republican leader Mitch McConnell said he believes the chamber is close to an agreement to vote Thursday on legislation to avert a crippling US rail strike.

“I think we’re about to get a deal, yeah,” McConnell said Thursday afternoon.

The comments came as Senate Democrats met behind closed doors with Labor Secretary Marty Walsh and Transportation Secretary Pete Buttigieg to discuss Congress’s effort to avert a strike by the Dec. 9 deadline.

As he entered the lunch with Buttigieg and Walsh, Senate Majority Leader Chuck Schumer said “we’re working towards” an agreement to bring the legislation to a vote.

The House on Wednesday cleared the bill on a bipartisan 290-139 vote as well as a related piece of legislation that would revise the original deal to add seven days of paid sick leave to the contract, one of the sticking points between unions and companies.

Taking a vote Thursday requires agreement among senators because under the chamber’s procedures, it typically would take days to clear the legislation. But facing a Dec. 9 deadline when a strike could begin, President Joe Biden prodded the Senate to act swiftly.

“Without action this week, disruptions to our auto supply chains, our ability to move food to tables, and our ability to remove hazardous waste from gasoline refineries will begin,” Biden said Wednesday. “The Senate must move quickly and send a bill to my desk for my signature immediately.”