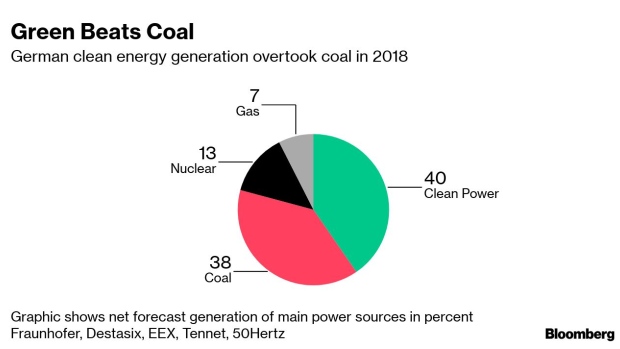 A worker stands near the continuous track wheels of a giant excavator at the open pit lignite mine, operated by RWE AG, in Hambach, Germany, on Monday, Aug. 13, 2018. Not far from Germany�s Rhine River, a fight to thwart giant excavators from grinding away what�s left of the 1,200-year-old Hambach forest came to a head this month as thousands of protesters faced�off with police in a tense, and at times violent, showdown. Photographer: Alex Kraus/Bloomberg , Photographer: Alex Kraus/Bloomberg

(Bloomberg) -- German Chancellor Angela Merkel’s cabinet approved an aid package worth as much as 40 billion euros ($44.7 billion) by 2038 for the nation’s coal regions, launching a drive to transform chimney-stack economies into high-tech centers.

Merkel’s administration announced an exit from coal power in February, saying it will wean the nation off the fossil fuel over two decades. The government pledged to compensate utilities and cushion the blow in lignite and hard-coal centers in Eastern Germany and on the Rhine River. As many as 60,000 jobs are linked to coal mining and power generation.

The government is “keeping it’s promise” to switch the regions’ fossil-fuel linked jobs into clean energy, Economy Minister Peter Altmaier said in a statement in Berlin Wednesday. The aid package -- which needs parliamentary approval -- will help the four main regions to become high-tech centers powered by green energy, he added.

Regional governors in the coal regions have demanded front-loading of financial aid, meaning they want to see money paid out quickly to turn fossil-fuel assets into new enterprises and jobs. The potential political fall-out of not doing so may be costly.

The cabinet’s decision on structural aid coincides with the European Parliament election. The populist Alternative for Germany party has strong support in eastern states and the party opposes plant closures and questions climate change.

The coal exit is also being managed by a second bill that will spell out the pace of plant closures and potential compensation for utilities like RWE AG, STEAG GmbH and Uniper SE. The government expects to finalize a draft by the fall.

To contact the reporter on this story: Brian Parkin in Berlin at bparkin@bloomberg.net

To contact the editors responsible for this story: Reed Landberg at landberg@bloomberg.net, Iain Rogers, Chad Thomas