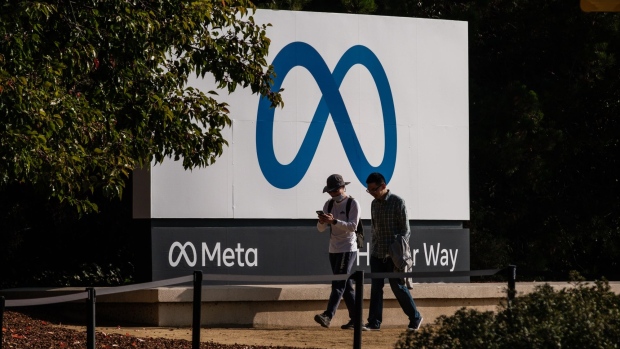 Meta Platforms signage outside the company's headquarters in Menlo Park, California, U.S., on Friday, Oct. 29, 2021. Facebook Inc. is re-christening itself Meta Platforms Inc., decoupling its corporate identity from the eponymous social network mired in toxic content, and highlighting a shift to an emerging computing platform focused on virtual reality. , Bloomberg

(Bloomberg) -- Meta Platforms Inc.’s independent Oversight Board criticized “several shortcomings” in the company’s cross-check program, which moderates the content posted by high-profile users such as former US President Donald Trump.

In a damning report published on Tuesday, the board called for significant changes to be made, including transparency around how the process operates and who qualifies for it, as well as reducing the harm from content shared by people within the program.

“Such content should not be allowed to remain on the platform accruing views simply because the person who posted it is a business partner or celebrity,” the board said in a blog post following the publication of the report.

The cross-check program, first revealed by The Wall Street Journal last year, was designed to help Meta avoid a public relations backlash by famous people who mistakenly have their posts taken down for rule violations -- something that happens to all users more and more often as the company relies on artificial intelligence for managing content violations. Former Danish Prime Minister Helle Thorning-Schmidt, a board co-chair, has previously criticized Meta in failing to explain how famous people get protection for their content that others don’t.

In a 46-page review, the board said it found the cross-check program, appears “more directly structured to satisfy business concerns,” than to advance the company’s human rights commitments.

The board made 32 recommendations for how Meta could comply with its commitments and address the identified issues, including “radically” increasing transparency around how the cross-check program works and to remove or hide content that is flagged for violations pending a review.

The Oversight Board, which was conceived by and funded by Meta and is comprised of 20 journalists, academics and politicians, began assessing cases last year. Chief Executive Officer Mark Zuckerberg wanted an external body with authority to check Meta’s work, and reverse its content decisions if necessary. Nick Clegg, Meta’s president for global affairs, said in a Twitter post on Tuesday that Meta has agreed to respond to the board within 90 days.