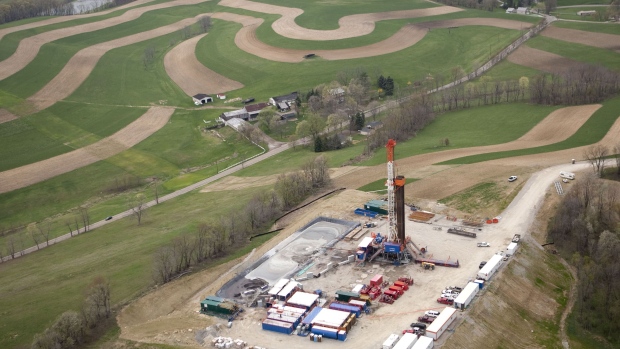 (Bloomberg) -- Range Resources Corp. claims to have one of the cleanest natural-gas operations in the US. Year after year, the western Pennsylvania shale pioneer reports a lower emissions rate for methane than virtually all its peers.

The landmark climate legislation that cleared the US Senate this week is meant to push more companies to be like Range. The bill would impose a first-of-its-kind fee on releases of the potent greenhouse gas from energy infrastructure.

But an examination of Environmental Protection Agency data reveals one of the pitfalls of that approach: companies have broad leeway to decide how much pollution they report, based on how they interpret more than 100 pages of complex agency rules.

An unorthodox reading of a single word in the EPA regulations allowed Range to slash its reported emissions from energy production by 93% in 2020 compared with the approach used by most oil and gas companies. That’s enough to move the company from the bottom of its peer rankings to the top. The EPA says this interpretation isn’t valid, although Range insists that it is.

Such wrangling could become more widespread if the bill becomes law and the EPA’s Greenhouse Gas Reporting Program, now a low-stakes counting exercise, starts hitting companies with millions of dollars in fees. Expected to move to the House this week, the Inflation Reduction Act would impose a levy of as much as $1,500 a ton on methane releases above a certain threshold. It’s one of the only noteworthy sticks in Democratic climate-and-energy legislation that focuses on carrots, such as subsidies for buyers of electric cars and for the development of wind and solar power.

“The entire approach to measuring and reporting methane needs to be rebuilt,” said Andrew Logan, who tracks company emissions at the investor group Ceres. “This is no longer an academic exercise. It’s something that will have real financial consequences for companies and investors.”

The stakes are high because one of the biggest sources of climate-warming pollution is natural gas itself. It consists mostly of methane, which has more than 80 times the short-term planet-warming impact of carbon dioxide and often leaks or is intentionally released in the course of energy extraction. Researchers have pointed out for years that EPA formulas, even when applied correctly, tend to undercount methane emissions. A 2018 study found about 60% more emissions from the oil and gas supply chain than what appears in EPA inventories.

Range is one of a handful of companies identified by Bloomberg Green that use the unorthodox interpretation in annual disclosures to the agency. EPA data suggest units of BP Plc and Coterra Energy Inc. have used the interpretation for years. Two privately held firms, Terra Energy Partners LLC and Flywheel Energy LLC, appear to have started using it for the first time in 2020, resulting in a sharp drop in reported emissions. (BP said without elaborating that its disclosures comply with EPA rules. Representatives of Coterra, Terra, and Flywheel did not respond to requests for comment.)

“Some companies just saw it as a loophole that they could take advantage of,” said Logan.

As of now, there’s little to stop companies from exploiting such ambiguities. Regulators review companies’ emissions disclosures for potential inconsistencies and can ask them to resubmit, but the figures are ultimately the companies’ responsibility, said EPA spokeswoman Shayla Powell. Of the oil and gas emissions reports with questionable disclosures identified by Bloomberg Green, only a few were flagged by the EPA as not compliant or still undergoing verification.

Most of the numbers in oil and gas producers’ emissions reports aren’t based on field measurements. Instead, the companies tally up the equipment they use — like compressors, tanks, valves and flares — and apply EPA formulas to determine estimated emissions rates.

An EPA proposal from June to update the rules noted “confusion” over a class of oilfield gizmos called intermittent-bleed pneumatic devices. These controllers use gas pressure to automatically open and close valves at remote well sites. By design, they sometimes release methane. Because there are hundreds of thousands in service, these devices are considered a major contributor to warming temperatures.

To tally their methane output, energy companies must determine how many controllers they have and how many hours they are operational. Then they plug these numbers into an EPA  formula to calculate how much gas they’re probably releasing. Most companies report that their controllers are operational virtually all the time — 23 or 24 hours a day, 365 days a year.

But a few companies have taken the word “operational” to refer only to the brief moments when a device is actually releasing gas. Range, for instance, estimated its 11,610 controllers were operational an average of just 8 minutes a day in 2020, the latest year for which disclosures have been published. Cabot Oil & Gas Corp., which merged with another company to form Coterra last year, reported its controllers were operational for just 4 minutes a day in 2020. BP said controllers in a field in Louisiana operated for a daily average of 10 minutes, although it used much higher figures in other basins.

In the June proposal, the agency said that interpretation is wrong, and that companies are supposed to include all of the times the devices are in service, not just when they’re releasing gas. It noted that the factor used to ballpark emissions from the devices — 13.5 cubic feet of gas per hour per device — was based on measurements over sustained periods of time.

But Range says its reading is valid, and notes that the recent clarification doesn’t have the force of law because it hasn’t been formally adopted as a final rule.

“We believe our reported data meets the current agency definition. If this, or any definition were to change, we would meet those definitions with our reporting,” Mark Windle, a Range spokesman, said in an email.

Windle provided an 8-page letter that Range sent to the EPA in 2019 laying out its reasoning for using the lower number of hours. “This letter was received and not disputed by the EPA,” he said. The agency said it never approved such an interpretation.

If Range had interpreted the rule the way most other energy companies do, it probably would have reported releasing an additional 22,000 metric tons of methane in 2020. That amount of gas has the same short-term global warming impact as adding 380,000 cars to U.S. roads. Range’s methane intensity, a measure of emissions per unit of energy produced, would have gone from being the best of its Appalachian peers to among the worst.

Windle said that Range inspects sites for leaks more frequently than required under EPA rules. The company has also voluntarily installed monitors at some well sites to keep better track of methane emissions and has installed equipment to minimize releases.

After the methane penalty becomes law, it is expected to generate as much as $1.9 billion a year from oil and gas companies, according to the Congressional Budget Office, with fees for some individual companies potentially reaching into the tens of millions of dollars. But even without the financial prod, some companies appear to be gravitating to Range’s reading of the rule.

Last year, a report commissioned by Ceres and the Clean Air Task Force identified Terra and Flywheel as among the largest methane emitters in the country, generating rare media attention for the two small, privately-held producers. A few months later, a new round of EPA disclosures appeared to show that both companies had slashed their emissions by more than half in a single year. Behind both drops: a cut in the amount of time their controllers were reported to be in operation. Terra dropped its estimate from 24 hours a day in 2019 to about 6 hours a day the following year. Flywheel went from 19 hours a day to about 14 seconds a day.

“All they really did was join the crowd of companies taking this questionable approach,” Logan said.

Agency rulemakers are already proposing to base more of companies’ climate disclosures on actual measurements, rather than rough estimates derived from equipment counts. The pending bill mandates that the EPA carry out that plan, and to revamp the reporting system for oil and gas companies within two years. The fee begins to kick in in 2024.

Companies that do undertake their own methane measurements sometimes discover a significant gap with assumptions baked into the EPA’s accounting formulas. Jonah Energy LLC, a Wyoming gas producer, deliberately uses a low hours-in-operation figure for its equipment — about an hour a day — because the standard approach would overstate how much methane is actually leaking, said Howard Dieter, a Jonah vice president. Unlike most producers, Jonah conducts detailed measurements across its operations. It was the first US company to earn a “gold standard” rating from the United Nations-backed Oil & Gas Methane Partnership last year.

After determining how much gas was spewing from its devices in 2020, Dieter said, Jonah reported an hours-in-operation figure that would result in the right amount of emissions under EPA formulas. He said Jonah has discussed the matter with agency officials. The EPA hasn’t yet said whether it’s comfortable with that approach.