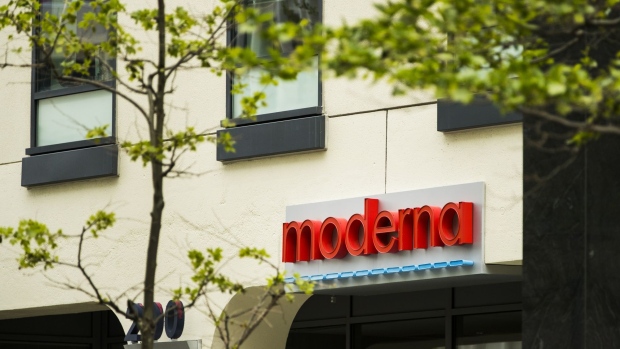 Signage is displayed on the Moderna Inc. headquarters in Cambridge, Massachusetts, U.S., on Monday, May 25, 2020. An experimental coronavirus vaccine from Moderna Inc. may wind up being “good enough” to be the first authorized inoculation, but is unlikely to be the best, an Evercore ISI analyst said. Photographer: Adam Glanzman/Bloomberg , Bloomberg

(Bloomberg) -- Moderna Inc.’s patents that were filed or awarded are being probed by the U.S. Department of Defense’s research arm, the Financial Times reported, saying the company failed to disclose government funding as required by federal law.

Knowledge Ecology International, a patient advocacy group, said in a report this week that researchers didn’t disclose in vaccine patents where they got about $25 million in grants from the department’s Defense Advanced Research Projects Agency, or Darpa, for its vaccine technology, the newspaper said.

“It appears that all past and present Darpa awards to Moderna include the requirement to report the role of government funding for related inventions,” the FT cited Darpa spokesman Jared Adams as saying. “Further, Darpa is actively researching agency awards to Moderna to identify which patents and pending patents, if any at all, may be associated with Darpa support.”

Moderna said it believed it complied with patent reporting requirements, including those related to Darpa, the newspaper said.

The Cambridge, Massachusetts-based company said earlier this week it’s in talks with Japan’s Ministry of Health, Labor and Welfare to potentially supply the country with 40 million or more doses of its vaccine candidate against Covid-19. It also unveiled new findings relating to its trial.