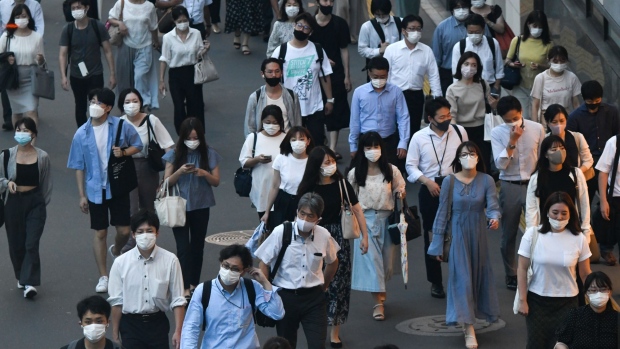 (Bloomberg) -- Japan is opening up again after closing its borders due to the Covid-19 pandemic for almost three years. Vaccinated tourists from most countries will be allowed in from Oct. 11, without the need to quarantine or submit to PCR tests.

When visitors arrive, they’re bound to notice (and appreciate) the affordability of dining, accommodation and shopping, thanks to a much weaker yen. There are also some new places to visit.

At the same time, a few things have changed, for better or for worse. Here’s a list compiled by Bloomberg Tokyo’s newsroom on what to expect:

Shibuya — famous for its huge crossing, Hachiko statue and plethora of shops — has seen some big changes over the past few years. Once known for underground clothing brands, graffiti and night clubs, the enclave has seen four mega-skyscrapers open in the past four years: Scramble Square, Fukuras, Stream and the re-built Parco. Each one houses stores from international and domestic brands, including Chanel and Asics.

The Scramble Square building, right in the middle of what used to be bus stops, is a visitor’s playground. There’s a large underground food hall at the bottom, and the observatory 46 floors above offers a nearly unobstructed 360-degree view of western Tokyo.

The iconic Miyashita Park underwent a large-scale renovation in 2020. Dotted with homeless tents less than a decade ago, the area is now a triple-story industrial chic complex made up of shops, green spaces, city views and a boutique hotel. On the roof is a fenced off skateboard park, a sandy court area for beach volleyball, a bouldering wall and grassy lawns maintained by a robot.

A massive project to move the Ginza subway line hub was also completed, to make way for even more construction. While much of the transformation was driven by the 2020 Olympic and Paralympic Games, rail operator and real-estate developer Tokyu Corp. plans to erect another mega skyscraper enveloping the rail station in 2027.

Generally speaking, crowds at major tourist draws have gotten smaller due to more cautious attitudes toward going out, and in some places there are caps on visitor numbers. That may change as the number of tourists from abroad surge. Subways and other forms of public transportation that used to be jam-packed during peak commuting hours also tend to be less crowded as more people work from home and alter their commutes.

Many attractions now require online ticket reservations, getting rid of the snaking queues often seen before the pandemic. This includes Tokyo Disney Resort and the National Museum of Nature and Science, so plan accordingly and don’t assume you can buy tickets on the spot.

When shopping at one of the country’s ubiquitous convenience stores or at supermarkets, cashier lines move more quickly thanks to the introduction of self-checkout terminals. Contactless payments and more efficient payment options in supermarkets, retail outlets and restaurants have also led to shorter lines and smaller crowds.

Unlike many other countries, Japan has stuck to mask-wearing, not just on public transport, but almost all the time. That’s no surprise to anyone who visited the mask-friendly country before the pandemic.

While there are no laws enforcing the practice, the government advises people to wear masks indoors, and outdoors when talking to others in close proximity, although it has hinted that it wants to move toward international norms. Even so, it has become a social norm to wear a mask indoors and out, except when eating or drinking.

Going maskless may attract unwanted attention. A huge variety of disposable masks are available at pharmacies and convenience stores. Expect to be asked to disinfect your hands and have your temperature taken on entering many restaurants and other businesses, as well. You’ll also see gadgets informing you of air quality indoors, and in taxis.

Hailing a taxi used to be a big challenge in Japan. Cab drivers seldom spoke any language other than Japanese, and addresses aren’t based on street names, so passengers would often have to point, bring a map or just trust that the driver would know the destination.

All that’s changed, thanks to the proliferation of taxi apps. Go and S.Ride are commonly used now to summon taxis, with the ability to directly add the destination before or during the ride. Payments can also be handled in-app as well. Didi also offers taxi-hailing in Japan. Uber is available as well for black-car rides or to summon taxis, although ride sharing is still not allowed.

Payment is easier too, with taxis accepting only cash a rarity. Passengers can use credit cards or use the apps to pay for rides, even after hailing a cab on the street. Flat rates to the airports have also been introduced, although we recommend taking the Narita Express or bus to Narita International Airport far outside Tokyo.

Before the pandemic, Japan was notorious for restaurants and retailers accepting only cash. Like many other countries, the risk of infection and health protocols has ushered in the era of cashless and contactless payments.

Almost all restaurants and shops accept credit cards, as well as contactless payments. QR-code based payments systems have also proliferated, including Japan’s PayPay. In fact, one new problem is that there can sometimes be too many options. We recommend getting hold of transit cards such as Suica and Pasmo; recharge them with cash or a credit card. They can be used across the country to pay for trains, taxi rides and quick purchases at convenience stores.

Sure, there are still plenty of places that accept (and prefer) cash, but there’s less pressure to carry around a wad of bills to travel, shop and eat. For the rare occasion where only cash is accepted, the ATMs at convenience stores work with most major debit and credit networks.

Tokyo’s infamous Robot Restaurant has, mercifully, disappeared. But one thing a visitor to Japan is bound to see are a few more robots replacing human labor.

Robot waiters — such as the BellaBot, KettyBot, HolaBot  — now deliver food in some restaurants.  Delivery robots, as well as security & disinfection robots, helped reduce transmission risks. AI robots are assisting vaccine-related inquiries at municipalities, and "healing robots" gave company to lonely people during stay-at-home measures and gave support to health-care workers. Some buildings have security robots to patrol lobbies and keep an eye on things.

In fact, orders of new industrial robots rose 29.6% in 2021, a record high, according to the Japan Robot Association.