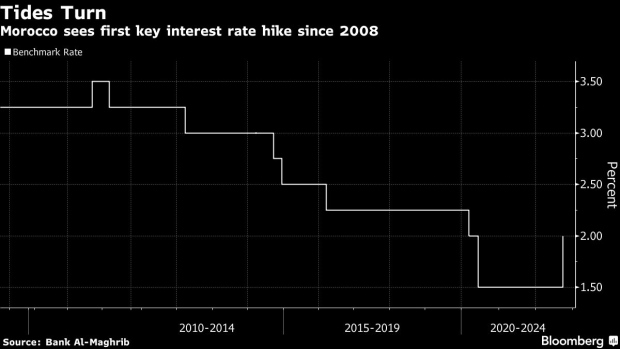 (Bloomberg) -- Morocco raised its key interest rate for the first time since 2008, becoming the latest African nation to reverse years of gradual monetary easing in a bid to tackle inflation that’s at its highest in decades.

Tuesday’s hike of 50 basis points to 2% came after the Bank al-Maghrib held the rate for eight consecutive quarterly policy meetings. The outcome was one of the regulator’s most unpredictable decisions in several years, with two of the kingdom’s major financial institutions at odds over whether it would shift the benchmark from a record low.

The raise marks a major change for a North African nation that’s been an outlier in a world that’s boosting rates in response to the biggest inflation shocks in years. It last adjusted rates in the first half of 2020, trimming a cumulative 75 basis points in a bid to blunt the impact of the pandemic on an economy reliant on tourism from Europe.

With the economy under pressure due to spillover from Russia’s invasion of Ukraine and a drought, the central bank said it took the decision to forestall “any de-anchoring of inflation expectations” and guarantee “the conditions for a rapid return to levels in line with the price stability objective.”

The regulator is now “expecting a significantly higher level of inflation in 2022, followed by a less pronounced downturn in 2023.”

An acceleration of inflation to an annual 8% in August had put pressure on the central bank to act. Still, analysts such as CDG Capital, the investment arm of Morocco’s biggest pension management fund, warned a hike could jeopardize a drive for cheap borrowing that was meant to revive the $115 billion economy.