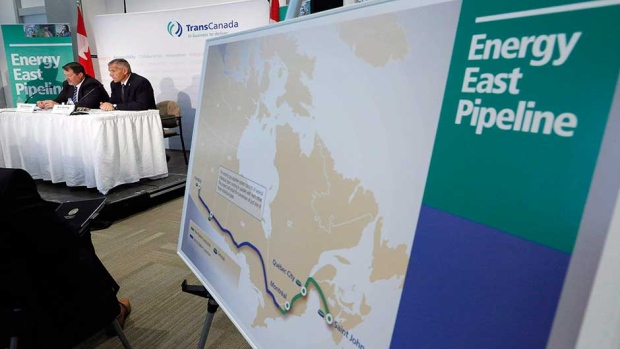 CALGARY -- In a decision cheered by environmentalists but considered a setback by the oil industry, Canada's national energy regulator says it will allow wider discussion of greenhouse gas emission issues in upcoming hearings for the Energy East Pipeline.

The National Energy Board said Wednesday it will for the first time consider the public interest impact of upstream and downstream GHG emissions from potential increased production and consumption of oil resulting from the project.

It says it will also, for the first time, allow discussion at hearings of the effect of meeting government GHG emission targets on the financial viability and need for the 4,500-kilometre pipeline.

Previously, the NEB only considered GHG emissions directly associated with construction and operation of a pipeline.

Alberta's energy minister expressed disappointment in the decision and said her office would continue to review it.

"Based on our initial analysis, we believe this would be a historic overreach and have concerns about what this means for energy development across Canada," Margaret McCuaig-Boyd said in a statement Wednesday.

She said deciding the merits of a pipeline on downstream emissions "is like judging transmission lines based on how its electricity will be used."

But, Ecojustice lawyer Charles Hatt said in a statement the NEB's decision is "both lawful and sensible."

"Surely it is now self-evident that a pipeline review must consider all potential greenhouse gas emissions and the risk that the pipeline will become a stranded asset in tomorrow's economy," he said.

Nick Schultz, vice-president of pipeline regulation for Canadian Association of Petroleum Producers, said the ruling allows needless duplication of existing federal environmental protections and will create more delays for builders who will have to submit more information.

"It's the signal about the length and complexity of the regulatory process that is becoming concerning here," he said.

"It is not like any pipeline company can control the emissions on either side of their pipe," he said.

Greenpeace Canada energy strategist Keith Stewart welcomed the decision but cautioned that details on how the ruling will affect the pipeline's ultimate approval or denial are still to be determined.

A spokesman for proponent TransCanada (TSX:TRP) said the company will review the NEB's permitted issues list before commenting on its potential impact on the $15.7-billion project.

Energy East is designed to carry 1.1 million barrels of crude per day from Alberta and Saskatchewan to refineries in Eastern Canada and an export marine terminal in New Brunswick.

The wider GHG review was opposed by the Alberta government but supported by Ontario in submissions to the NEB.

The NEB list of topics is used during hearings to restrict submissions to those considered to be within the board's mandate. It said it received 820 submissions after inviting public comment on widening its topic list in May.

The regulator said it will now invite public comment on the completeness of TransCanada's applications before issuing a hearing schedule.

The original Energy East review was derailed in September 2016 after members of the regulatory panel overseeing the hearings resigned amid questions about a potential conflict of interest.

In January, the NEB invalidated nearly two years of decisions made by the previous panel and a new panel was appointed.

The Energy East review is taking place at the same time that the government considers a sweeping overhaul of the NEB following a report in May that said the system is broken and the NEB should be split into two agencies.

In granting approval to Kinder Morgan's Trans Mountain pipeline expansion in May 2016, the NEB ordered an unprecedented requirement to account for and offset greenhouse gas emissions related to pipeline construction.