The shares plunged as much as 15 per cent after Netflix added 5.2 million users in the period, about a million fewer than it predicted. Its outlook for the current quarter also reflected a deceleration: The world’s largest paid online TV network expects to add 5 million customers, a slower pace than a year earlier.

Shareholders and analysts now have the job of weighing whether the slowdown is a blip or a longer-term problem. Netflix’s stock had more than doubled this year, with investors betting that the company will add tens of millions of customers around the world for years to come.

Along the way, Wall Street may have focused more on the allure of the Netflix story, rather than the company’s fundamentals, said Rob Arnott, head of fund advisory firm Research Affiliates.

“They qualify as a bubble,” he said on Bloomberg Television.

The stock fell to as low as US$342 in extended trading, a decline that erased about US$25 billion in market value.

Netflix executives expressed little concern on a call with analysts and investors, insisting their growth over the past 12 months has still exceeded expectations. Netflix fell short of its forecasts a couple years ago, a shortfall the company blamed at the time on the transition to chip-based credit cards.

“We never did find an explanation to that other than lumpiness in the business,” Chief Executive Officer Reed Hastings said.

One reason for this shortfall may be a lack of content. Netflix released a thin slate of shows in the quarter, relative to its typical output. It didn’t add additional seasons of its biggest hits, such as “Stranger Things,” nor did a new show become a phenomenon. Ever since Netflix released “House of Cards” in 2013, the company has credited new seasons of original series with luring customers.

Netfllix did release a new season of “13 Reasons Why” and the Marvel series “Luke Cage,” as well as a breakout standup comedy special in Hannah Gadsby’s “Nanette.”

Potential new customers may have also been distracted by the World Cup, a quadrennial soccer tournament that is among the most-watched TV events in the world.

Investors value Netflix at a far higher level than other media companies of similar size because of that potential for future growth. Its market valuation surpassed that of Walt Disney Co. this year, despite reporting less than a quarter of the revenue.

Netflix’s second-quarter revenue also came in short of projections. It posted US$3.91 billion, compared with an average estimate of US$3.94 billion. But the Los Gatos, California-based company hit a milestone: International customers accounted for a bigger piece of sales than domestic users.

Once primarily a service for English speakers, Netflix has ramped up its investment in shows filmed in other languages. The company debuted its first Danish and first Indian dramas in the quarter, and it plans to release a new foreign-language program at least once a week next year.

Profit was a bright spot in the latest quarter, but not by enough to reassure investors. Earnings amounted to 85 cents a share, topping the 79-cent estimate of analysts.

“We had a strong but not stellar quarter,’’ the company wrote in a letter to shareholders. 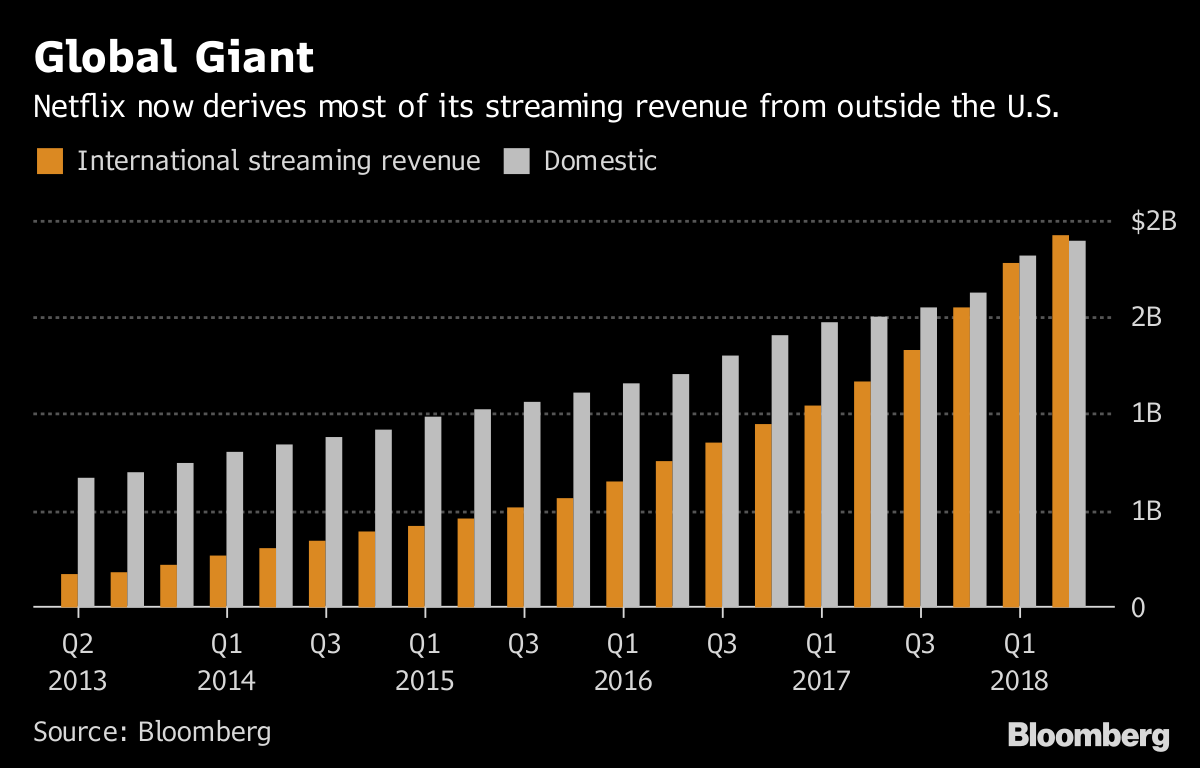 Producing and promoting a library of shows for a global audience has come at a high cost. Netflix has borrowed money repeatedly to pay for its programming, and expects to spend between US$3 billion and U$4 billion more in cash than it will generate in 2018. Marketing expenses surpassed US$500 million in the quarter, nearly double the amount spent a year ago.

Netflix’s rise has pushed other technology and entertainment companies to invest more in online video services. Disney is selling an internet version of its sports network ESPN and plans to introduce a general entertainment video service next year. Apple Inc., meanwhile, is spending more than US$1 billion on original programming.

Netflix said Monday that it expects more competition, but dismissed any potential negative impact on its business. “Our strategy is to simply keep improving, as we’ve been doing every year,’’ the company said.

Research Affiliates’ Arnott expects the Netflix rout to have a broad impact on indexes. It had been the second-biggest gainer on the S&P 500 so far this year.

“There’s a distinct risk of a ripple effect,” Arnott said.