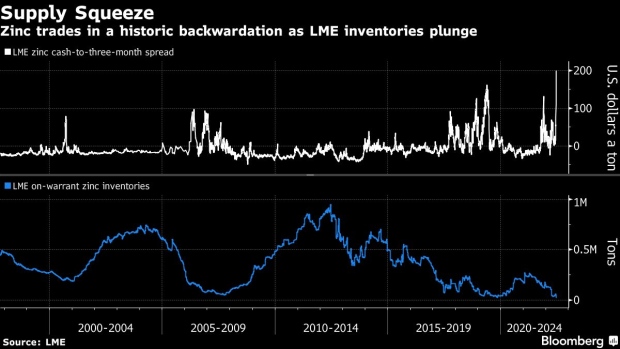 The premium for spot zinc over futures spiked on Thursday to the widest since 1997, in a condition known as backwardation that is a hallmark feature of a supply squeeze. The sharp surge comes after inventories slumped this week to the lowest level in at least 25 years. The LME said it’s monitoring the situation closely.

The turmoil in zinc comes three months after an unprecedented short squeeze in the nickel market, which sparked a 250% rally in prices and led the bourse to halt trading for a week. The LME has since introduced several emergency measures designed to prevent short squeezes from running out of control, but the historic backwardation in zinc could still mean heavy losses for buyers who need metal now.

Industrial metal prices have been hammered in recent sessions by fast-mounting worries about a potential worldwide recession, but many metals including zinc, copper and aluminum remain in critically short supply.

LME zinc inventories have been depleted almost entirely in the U.S. and Europe, and this week there’s been a rapid move to withdraw the remaining stock in Asian depots. Readily available zinc stockpiles on Thursday fell to 19,825 tons -- equal to about half a day’s worth of global consumption.

Exchange inventory levels are important in physically settled contracts because every short seller who holds a position until the contract’s expiry must deliver physical metal -- in the LME’s case, in the form of a registered parcel in an LME warehouse. One of the LME’s recent measures was to allow short position holders to defer delivery, but they still have to pay a penalty.

While three-month zinc prices fell 1.6% on Thursday, the spread between spot contracts and futures spiked dramatically as the collapse in inventories left investors and industrial hedgers with expiring short positions with few sellers to turn to as they looked to buy their contracts back.

The last time spreads were this wide, in 1997, Chinese traders accused Glencore Plc of distorting the market by driving down LME inventory levels. The company denied the allegation.

In April this year, Bloomberg reported that Trafigura Group had been withdrawing significant volumes of zinc from London Metal Exchange warehouses to make up for a shortfall in its own supplies after production cuts in Europe. The company’s Nyrstar unit has reduced production at zinc smelters in Europe in response to ballooning power costs.

Cash zinc contracts surged to a premium of $199.85 a ton over three-month futures on Thursday.

The spread between contracts expiring tomorrow and those maturing a day later also spiked to $100 a ton, the highest level on record in data going back to 1998. However, the new 1% daily backwardation limit on the spread means that the trades will be reset in line with the maximum level.

“We note stock withdrawals in the zinc market, and are monitoring this closely,” LME spokeswoman Miriam Heywood said by email. “We have implemented a number of additional controls on LME metals to address a low stock environment -- including a backwardation limit and deferred delivery mechanism -- which are designed to ensure continued market orderliness.”