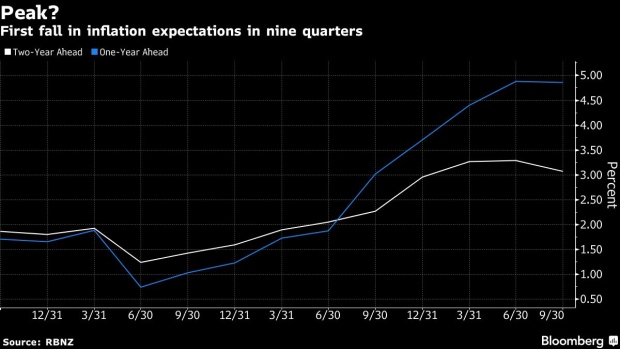 Buildings in Auckland, New Zealand, on Monday, June 13, 2022. New Zealand's central bank is to begin selling the bonds acquired during its quantitative easing program back to the government, and intends to gradually dispose of all its holdings over the next five years. Photographer: Fiona Goodall/Bloomberg , Bloomberg

Expectations fell to 3.07% in the third quarter from 3.29% in the prior three months, the RBNZ said in a quarterly Survey of Business Expectations released Monday in Wellington. The second-quarter reading was the highest since early 1991 and had been the eighth straight gain.

The central bank is forecast to deliver a fourth consecutive half-percentage point hike at next week’s meeting, taking the Official Cash Rate to 3%. The currency fell after today’s release as investors bet that easing inflation expectations may prompt policy makers to adopt a slower pace of rate increases in coming quarters.

The RBNZ has expressed concern at rising inflation expectations, which have been fanned by headline inflation soaring to a 32-year-high of 7.3% in the second quarter. The central bank is required to target consumer-price growth in a 1-3% band.