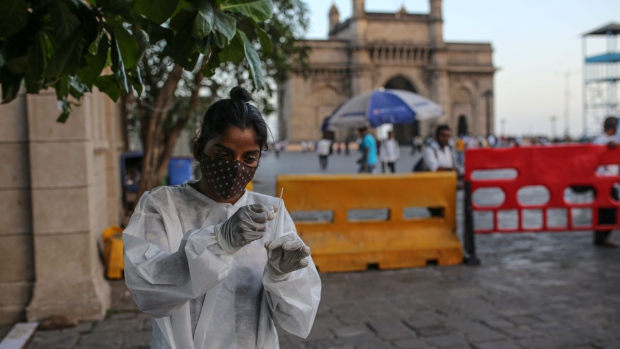 A healthcare worker prepares to administer a rapid antigen test near the Gateway of India monument in Mumbai, India, on Wednesday, March 31, 2021. India’s consumption demand and business activity looked steady in February, although chances of a strong recovery appeared doubtful after a sharp surge in virus cases and the increasing risk of renewed lockdowns. Photographer: Dhiraj Singh/Bloomberg , Bloomberg

New Zealand will temporarily suspend arrivals of its citizens and residents from India due to a spike in the number returning with Covid-19.

The suspension will run April 11-28, Prime Minister Jacinda Ardern announced at a press conference on Thursday.

“This is not a permanent arrangement, but rather a temporary measure until we are able to better understand and manage the current situation we are facing,” Ardern said. “While arrivals with Covid from India have prompted this measure, we are looking at how we manage high-risk points of departure generally. This is not a country-specific risk assessment.”

It is the first time New Zealand, whose border remains closed to foreigners, has stopped accepting citizens and residents from entering. It follows a spike in the number of people arriving from India who test positive to Covid-19 while serving their mandatory two weeks of managed isolation.

Of the 23 new positive cases in isolation announced today, 17 arrived from India. That’s despite a requirement to return a negative test before departure for New Zealand.

“People are likely getting the virus following their test as they travel to the airport and before they board a plane,” Ardern said. “We do want to see fewer cases arriving.”

During the suspension, the government would be looking at how to improve its management of arrivals from high-risk countries.

New Zealand has eliminated the virus from the community and has managed to stamp out minor outbreaks.