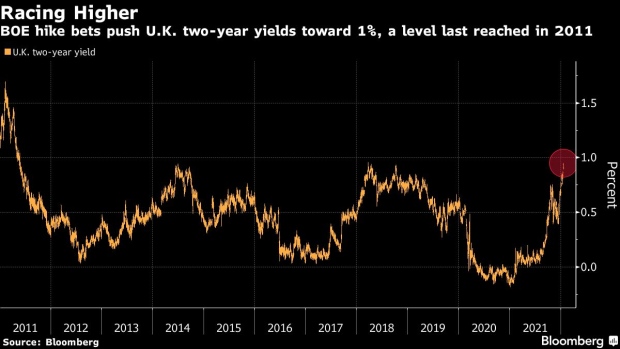 Commuters exit Bank Underground station during the morning rush hour in London, U.K., on Tuesday, Dec. 14, 2021. U.K. companies added to payrolls in November at a record pace and unemployment fell, figures that are almost certain to fuel concerns at the Bank of England that unsustainable inflation pressures are building in the labor market. Photographer: Chris J. Ratcliffe/Bloomberg , Bloomberg

(Bloomberg) -- U.K. bonds are off to their worst start to a year in more than a decade, and there are few signs the losses will ease soon.

Two-year borrowing rates are closing in on 1% for the first time since 2011 -- just a year after they fell to a record low. Their swap counterparts hit an 11-year high this week as money markets wager on a quicker pace of Bank of England policy tightening to cap the fastest inflation in three decades.

Traders have almost fully baked in 25 basis points of BOE tightening to 0.5% next month and are close to betting on the Bank Rate climbing to 1% by June. Both levels are significant because policy makers have signaled they may stop reinvesting expired bonds and start selling the central bank’s gilt holdings once these respective rates are reached.

Beyond that point, there are few signs that expectations for higher borrowing costs will slow, with money markets betting rates will climb to 1.25% by year-end. Bob Stoutjesdijk, a fund manager at Robeco Institutional Asset Management, goes one step further and suggests borrowing costs could rise to as high as 1.75% over that time frame.

“Markets can price an even higher bank rate later this year with this level of inflation and a strong labor market,” he said, adding “that would imply a few meetings where they would hike 50 basis points per meeting.”

Political turmoil is also in focus as Prime Minister Boris Johnson is under pressure to resign, and investors are weighing the prospect of his early departure and the uncertainty about succession it would entail. His Conservative Party peers rallied behind him as he battled through his weekly interrogation in Parliament on Wednesday.

U.K. gilt yields and the pound have defied the turbulence, buoyed instead by a ramp-up in policy tightening expectations. Sterling has mirrored this month’s advance in rates, gaining to as high as $1.3749, the strongest in more than two months.

For Peter Chatwell, head of multi-asset strategy at Mizuho International Plc, the pain of higher yields should rapidly transition to longer-maturity bonds. He sees the BOE raising rates to 0.5% next month. If that proves correct, he expects the central bank to stop reinvesting expired bonds, and for gilt sales net of coupons and redemptions to turn positive.