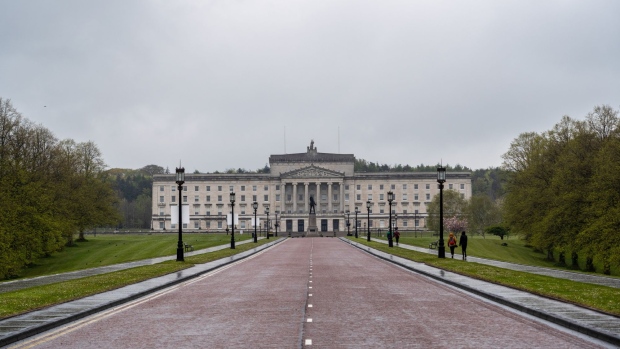 The Parliament Buildings, often referred to as Stormont, where the Northern Ireland Assembly takes seat, in Belfast, Northern Ireland, U.K., on Saturday, April 30, 2022. Sinn Fein looks set to become the largest party in Northern Ireland’s assembly, potentially marking a historic shift in the region’s political balance, according to a poll ahead of Thursday’s election. Photographer: Paulo Nunes dos Santos/Bloomberg , Bloomberg

(Bloomberg) -- Northern Irish politicians failed to form a government for a fifth time since May’s election, compounding a political impasse triggered by a dispute over the region’s post-Brexit trade status.

Following the latest proof of political stalemate, attention will now turn to the UK’s Northern Ireland Secretary Chris Heaton-Harris and whether he chooses to call a fresh election or gives parties more time to reach an agreement after the Democratic Unionist Party again stopped the election of an Assembly Speaker — a prerequisite for other business to take place.

The DUP has refused to participate in the region’s power-sharing government since February, in protest over the UK’s agreement with the European Union to keep Northern Ireland inside the bloc’s single market after Brexit.

That has raised the political stakes for the UK as Prime Minister Rishi Sunak’s government tries to persuade the EU to change that part of the Brexit agreement, known as the Northern Ireland protocol.

There are signs that the mood between the UK and EU is improving. Last week, Irish Foreign Minister Simon Coveney said a “landing zone” is possible “within the next few weeks” — though he also said there had been “no major breakthroughs.” EU Commission President Ursula von der Leyen also said on a visit to Dublin last week a workable solution “is within reach.”

Asked in the House of Commons Wednesday about the status of EU talks, Sunak said he wants to see issues with the protocol resolved as quickly as possible.

“I do believe that if people enter into these talks we’re having with a spirit of goodwill and pragmatism that we can indeed find a way through,” he said.

Coveney is in Belfast Wednesday for meetings including with Heaton-Harris and the Northern Ireland Business Brexit Working Group.

The latest attempt to agree on a Speaker in Northern Ireland followed a request by nationalist party Sinn Fein, who won the most seats in May’s election. The motion was backed by the Alliance Party and Social Democratic and Labour Party, who are all calling for the DUP to end its boycott to enable the assembly to address the cost-of-living crisis.