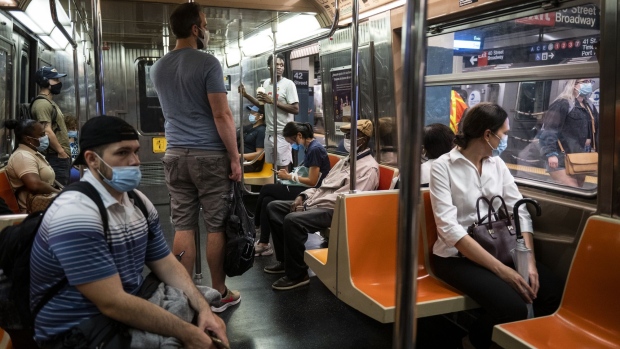 Commuters ride in a subway car in New York. , Bloomberg

(Bloomberg) -- If you feed them, they will come.

New York City’s subway system and the James Beard Foundation say they’ve come up with a way to lure riders back onto trains and buses: a chance to win meals at neighborhood restaurants, tickets to a wine and food festival in Westchester and a stay at a posh hotel.

The Metropolitan Transportation Authority says the DineAway Sweepstakes includes an overnight stay for two at Hotel Indigo and dinner at Bistro 72, as well as gift cards for restaurants throughout the city such as Nneji in Astoria, Queens, and Rincón Melania in Long Island City, Queens.

“As a small business owner, my hope is that this campaign inspires people to take a field trip to different neighborhoods and support the diverse and culturally rich local businesses across New York City,” Chef JJ Johnson, whose restaurant FIELDTRIP in Harlem is participating in the sweepstakes, said in a statement Thursday. “Getting lost in a new neighborhood can open your eyes to new cuisines, traditions, and cultures.”

As more New Yorkers settle into a hybrid schedule of working from home at least part of the week, the MTA is looking to boost ridership for activities and events not tied to the office and outside of the traditional morning and afternoon rush-hour commute.

“We are thrilled to partner with the MTA on the DineAWAY campaign, encouraging riders to explore and celebrate the city’s vibrant cultural and culinary diversity, while supporting critical local businesses,” Clare Reichenbach, chief executive officer of the James Beard Foundation, said in a statement Thursday.

Increasing ridership is a key priority for the MTA, the largest mass-transit provider in the U.S., as the agency needs more revenue to cover projected budget shortfalls after the coronavirus pandemic upended ridership.

There were 3.6 million subway trips on Wednesday, a pandemic high and the most since March 2020, Janno Lieber, MTA’s chief executive officer, told reporters Thursday at Grand Central Terminal. Still, that’s about 2 million short of the average 5.5 million weekday trips in 2019.

“The office workers, there’s a little less back to work, still a lot of remote work in the office-based industries,” Lieber said. “But everybody else, when they have somewhere to go, students, people headed for medical appointments, people engaged in other activities -- they’re choosing to use the MTA system.”

High-profile incidents on the system this year have left residents hesitant to take transit. A man last month opened fire on a subway train in Brooklyn, injuring more than two dozen people. A woman was killed in January after being push onto the subway tracks in Time Square. Mayor Eric Adams has increased the number of uniformed police officers on subway cars and platforms this year amid a spike in reported assaults.

Subway ridership fell by more than 90% when the coronavirus shuttered restaurants, businesses, schools and cultural institutions. Weekday subway usage is down by about 40% of pre-pandemic levels.