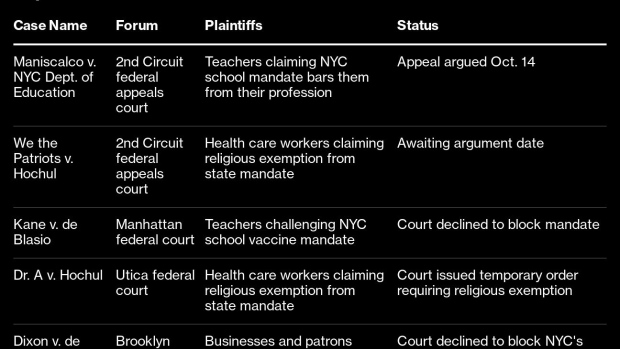 Stacked chairs sit in a classroom during summer break at a public elementary school in the Brooklyn borough of New York, U.S., on Wednesday, Aug. 19, 2020. New York City's public schools can hold in-person classes this fall, Governor Andrew Cuomo announced, paving the way for the district to become the only major U.S. system to open its doors despite growing unease among teachers, administrators and parents. Photographer: Jeenah Moon/Bloomberg , Bloomberg

(Bloomberg) -- A federal appeals court expressed skepticism of a bid by four New York City public school employees to halt the city’s Covid vaccination mandate, as a three-judge panel questioned a lawyer for the workers.

Circuit Judge Susan Carney balked at the attorney’s argument that teachers are a constitutionally protected class and that the vaccine requirement infringes on a fundamental right.

“I’m having difficulty seeing why this is an irrational policy decision of the city,” she said of the mandate in a hearing Thursday in Manhattan.

The workers’ lawsuit is one of dozens filed across the country questioning the legality of mandates by governments and private employers struggling to curb Covid-19. The New York City school employees’ suit is unusual in its claim that the city’s vaccine mandate effectively makes the teachers unemployable, as the biggest school district in the U.S. faces off against claims of individual liberty.

The city’s mandate bars employees from working in schools if they can’t show proof of at least one vaccine dose. Teachers and staff who don’t get vaccinated are suspended without pay, though with benefits, and aren’t permitted to work elsewhere while on leave. The four employees say the requirement illegally discriminates against them. They say it threatens to put thousands out of work and compromise the children’s education.

“Teaching in New York City is a profession,” Louis Gelormino, the lawyer for the workers, told the panel. “It’s a fundamental right to engage in that profession.”

The case was filed last month by Rachel Maniscalco, a Staten Island teacher who was later joined in the case by another teacher and two school paraprofessionals. They also claim the mandate disadvantages them because it doesn’t include the option of weekly Covid tests, an alternative available to other city workers. Thursday’s arguments were the first opportunity for the appeals court to grapple with the legal merits of government attempts to force compliance with Covid-19 vaccine requirements. The panel heard arguments on an expedited schedule in hopes of providing legal clarity to thousands of staff and more than a million schoolchildren.

Other challenges in New York are making their way through the courts. New York City’s program requiring proof of Covid-19 vaccination to enter restaurants, gyms and clubs can continue, a federal judge in Brooklyn ruled Tuesday, finding no racial bias in the mandate. A federal judge in Manhattan ruled the same day against a different challenge by New York City teachers and staff to the school vaccine requirement. The U.S. Supreme Court may have the final say on such mandates.

New York City claims the vaccine requirement is necessary to protect staff and students, many of whom aren’t eligible to be vaccinated. Covid vaccines are currently not authorized for kids under 12. About 95% of school employees had gotten at least one dose of the vaccine when the mandate went into effect Oct. 1, according to the city.

Read More: N.Y. Vaccine Mandates Get Flurry of Rulings in Court Fights “The city has no interest in losing committed career teachers. Zero interest,” said Susan Paulson, a lawyer for the city, answering the criticism of one of the judges that the mandate is a “ham-handed,” if possibly constitutional, policy to coerce teachers to get their shots.

The city argues that there’s nothing in the U.S. Constitution giving teachers the right to “demand continued public employment while ignoring their employer’s requirement that they be vaccinated against a dangerous infectious disease as a condition of working in close quarters with vulnerable children.”

Even if the teachers succeed in their claims, they could be adequately compensated with awards of back pay, the city claims, arguing against an order that would force the schools to allow unvaccinated employees back in.

QuickTake: Texas Companies Are Stuck Between Mandates. What Now?