Oil posted its biggest weekly gain on record with prices swinging in a US$20 range since Russia invaded Ukraine and sparked fears of a major supply crunch.

Futures in New York rose by more than US$24 this week, the highest weekly dollar increase on record. Oil extended gains Friday on news the Biden administration is weighing a ban on U.S. imports of Russian crude oil. Brent traded in its biggest range since the launch of the futures contract in 1988 -- eclipsing the wild swings in the global financial crisis of 2008 and when demand plunged in the coronavirus pandemic.

“There has been nothing to take the edge out of this market and we’ve had single direction volatility, meaning prices higher,” said Rob Haworth, senior investment strategist at U.S. Bank Wealth Management. To lower prices, the market would need to see OPEC output or U.S. drilling activity to change meaningfully, he said.

Prices climbed early in Friday’s session after Ukrainian officials said Russian forces attacked a nuclear plant -- Europe’s biggest. While the likelihood of a major disruption to Russian supply has boosted prices this week, signs that an Iranian nuclear deal may be near added to price volatility.

Conversations are taking place within the Biden administration and with the U.S. oil and gas industry on the impact banning Russian oil imports would have on American consumers and the global supply, according to people familiar with the matter. A White House spokesperson said no decision has been made. 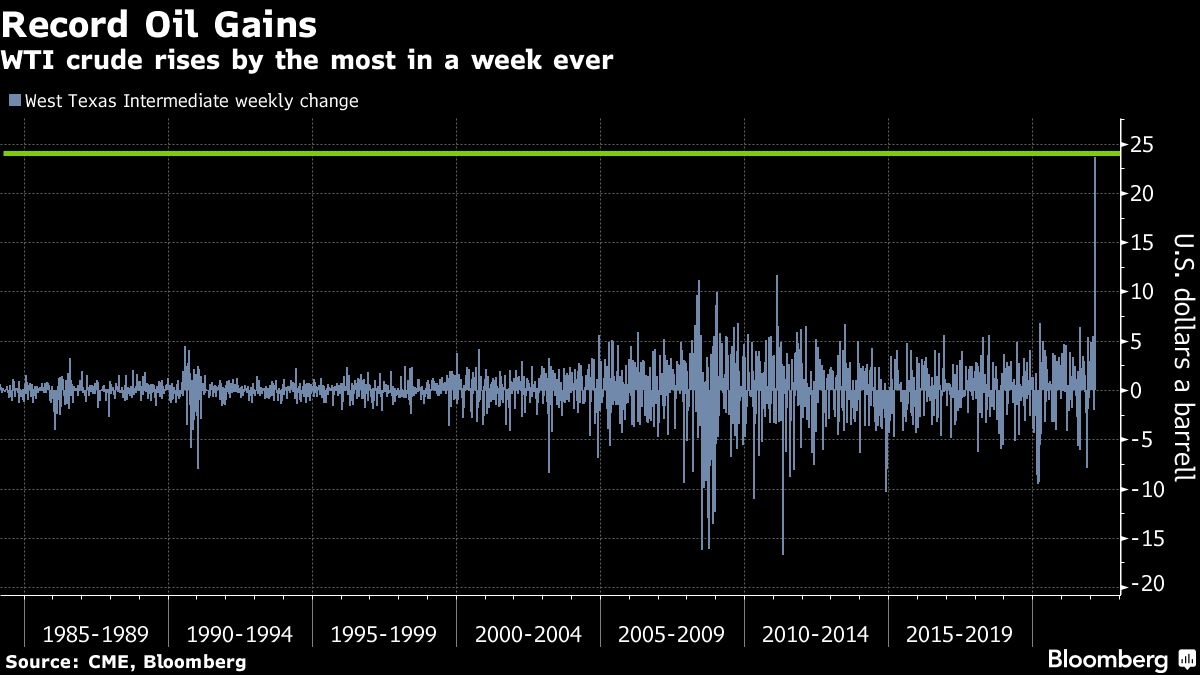 In a bid to cool prices, the International Energy Agency announced a release of emergency reserves of 60 million barrels, that has so far failed to quell supply concerns. The agency said this is an “initial release” and that it is “ready to recommend additional steps” if necessary, according to a statement Friday.

JPMorgan Chase & Co. said global benchmark Brent crude could end the year at US$185 a barrel if Russian supply continues to be disrupted, and some hedge funds are eyeing US$200. Goldman Sachs says that without Russian barrels on the market, oil could reach US$150 in the next three months.

“We have no buffer in terms of inventories left, and what shale producers have told us, once again, is that the elasticity is quite small,” Damien Courvalin said during a Bloomberg Television interview on Friday.

The invasion has reverberated throughout the energy sector. Global oil majors such as BP Plc, Shell Plc and Exxon Mobil Corp. are exiting Russia, buyers of its crude are seeking alternatives and shipping costs are spiking. Russia’s Lukoil PJSC called for a “fast resolution of the military conflict.”

While sanctions haven’t been imposed on Russian energy exports, buyers are shunning the nation’s crude as they navigate financial penalties. Germany and the White House oppose a ban on Russian oil imports, though U.S. lawmaker support to prohibit shipments into America is growing.

The physical market-- where real barrels are bought and sold-- has also rallied sharply in recent days, as traders rush to supplies at healthy premiums. Saudi Arabia raised oil prices for buyers in Asia for April crude at a record price. Europe’s diesel prompt timespread rose over US$30 while BP Plc has taken a key production unit offline at Europe’s second-biggest oil-processing plant.

The head of the world’s atomic watchdog said his trip to Tehran on Saturday could “pave the way” for reviving the Iran nuclear deal, a pact that would see the return of official oil exports. The OPEC producer has millions of barrels of oil stored offshore that could flow quickly into a tight market.

Brent remains in deep backwardation, a bullish structure where prompt barrels are more expensive than later-dated cargoes, signaling a tight supply-demand balance. The benchmark’s prompt spread was US$3.97 a barrel after touching record levels in recent days.

Against this backdrop, OPEC+ stuck with its gradual scheduled increase of supply in April during its monthly meeting Wednesday, wrapping up the gathering in record time without discussing the invasion of Ukraine. Russia is one of the key leaders of the cartel, along with Saudi Arabia.