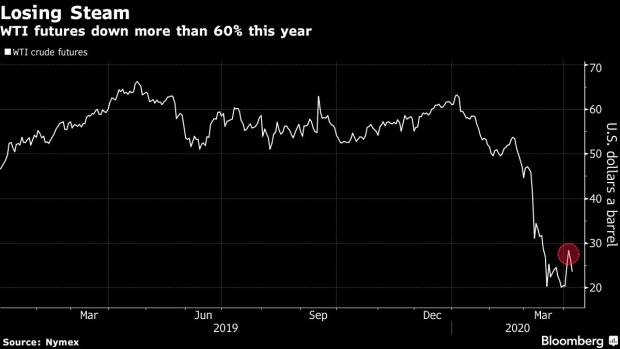 (Bloomberg) -- Crude steadied in Asia, holding under $25 a barrel as traders weighed whether output cuts being discussed by the world’s top producers would be enough to offset an unprecedented demand loss from the coronavirus outbreak.

Futures in New York rose as much as 3.5%, after sliding more than 9% on Tuesday. Saudi Arabia and Russia are hammering out terms to a production agreement, with OPEC+ talks planned for Thursday and a G-20 meeting of energy ministers set for Friday, according to people familiar with the matter, although a deal hinges on some form of cooperation from the U.S.

There are grounds for optimism on that front. The U.S. Energy Information Administration slashed its oil output forecast by almost 10%, saying it now expects the nation to pump an average of 11.8 million barrels a day in 2020. The 2021 estimate was cut to just over 11 million. The country is currently producing 13 million barrels a day.

Read More: In the Big OPEC++ Output Deal, Who’s In and Who’s Out?

The industry-funded American Petroleum Institute reported a 11.9 million barrel increase in weekly nationwide crude stocks, according to people familiar with the matter. That’s above analyst expectations for a 9.25 million barrel rise. The industry group also reported a 6.8 million barrel jump in oil stocks at the Cushing, Oklahoma hub, which would be the largest in data going back to April 2004 if the EIA confirms that in its report Wednesday.

Exxon Mobil Corp. plans to slash its spending by $10 billion -- more than any other supermajor oil explorer has cut to weather the unprecedented market collapse -- and yet its production in North America’s biggest shale region is still forecast to rise.