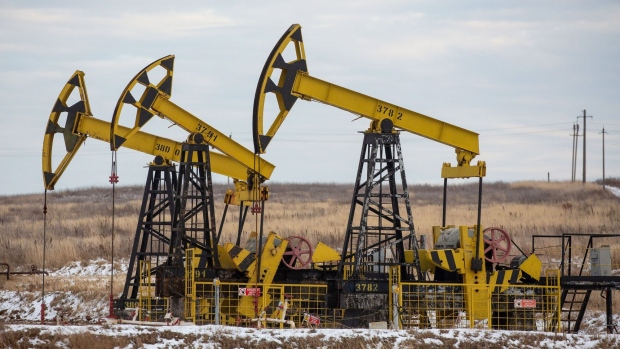 (Bloomberg) -- An OPEC+ ministerial panel recommended a gradual increase in oil output to the end of the year, paving the way for the wider group to reach a deal that would keep a firm grip on supply even as prices trade at two-year highs.

The OPEC+ Joint Ministerial Monitoring Committee, which includes Russia and Saudi Arabia, recommended that the group should add 400,000 barrels a day each month from August to December, a delegate said, asking not to be named because the information isn’t yet public.

The panel also suggested that the duration of the cartel’s production-cuts agreement should be extended to December 2022. The current deal, forged last year at the height of the first wave of the coronavirus pandemic, is due to expire in April, potentially returning millions of barrels a day of supply to the market when it still may not be needed.

Oil prices rose, trading near $75 a barrel in New York, on expectations that the supply will remain tight even as the cartel gradually opens the taps. The market reaction suggests concerns around inflation will continue to grow, influencing the decisions of policy makers around the world as they try to nurture a sustainable recovery from the Covid-19 pandemic.

“The price reaction says everything,” Giovanni Staunovo, a commodity analyst at UBS Group AG, said after preliminary details of the OPEC+ deal had emerged. “The supply increase would be less than market participants expected and demand is still expected to rise into August.”

Crude has risen around 50% this year, with the recovery in demand from the pandemic outpacing the revival of OPEC+ supplies after last year’s deep cuts. Oil’s surge, combined with a rally in other commodities, has central banks fretting about inflation again. It also shows how Saudi Arabia and Russia are back in the driving seat of the global energy market -- a remarkable comeback from negative prices just over a year ago.

The Organization of Petroleum Exporting Countries and its allies are already in the process of reviving crude supplies halted last year in the initial stages of the pandemic. The 23-nation coalition decided to add about 2 million barrels a day to the market from May to July, and the question before ministers on Thursday was whether to keep going in the coming months.

The market has experienced a supply deficit for much of this year as the group’s output increases didn’t keep pace with the demand recovery. In the cartel’s view, that’s been an entirely necessary remedy -- the only way to deplete the vast surplus in fuel stockpiles that accumulated as economies went into lockdown.

Now, the group’s data show oil inventories are back down to average levels as a strong revival in fuel consumption continues. Demand in the second half will be 5 million barrels a day higher than in the first six months of the year, OPEC Secretary-General Mohammad Barkindo said on Tuesday.

Yet there are several factors that could undo the rally, prompting influential OPEC+ members like Saudi Arabia to repeatedly urge caution.

There’s the risk of a supply influx if the U.S. reaches a nuclear deal with Iran. The highly infectious delta variant of Covid-19, which is already sending some countries back into partial lockdown and triggering a worrying rise in cases in other nations, threatens the demand recovery.

(Updates with details of deal extension in third paragraph.)