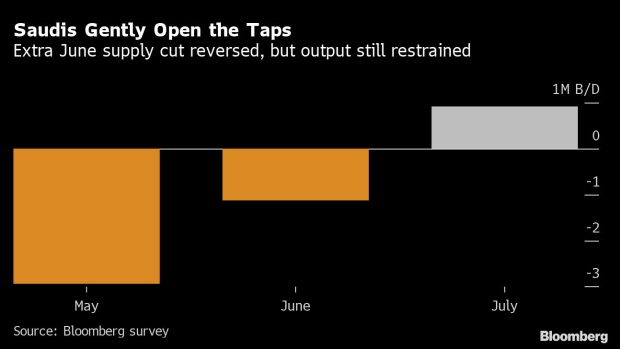 Saudi Arabia, the United Arab Emirates and Kuwait restored the additional output taken offline in June, when they had amplified efforts to disperse an oil glut left behind during the coronavirus crisis.

The Organization of Petroleum Exporting Countries increased output by 900,000 barrels a day to 23.43 million a day, according to a Bloomberg survey. It’s based on information from officials, ship-tracking data and estimates from consultants including Rystad Energy AS, Petro-Logistics SA, Rapidan Energy Group and JBC Energy GmbH.

OPEC and its partners are continuing to restrain output in accordance with their pact to limit production to tackle the steepest collapse in demand ever seen. Their labor has helped almost triple crude prices from the two-decade low in late April, lifting Brent futures in London to about $43 a barrel.

As oil consumption recovers with the restart of economic activity worldwide, the coalition of producers is poised to open the taps even further this month. The group will return 1.3 million to 1.5 million barrels a day to the market this month, according to Saudi Arabia.

Still, there are concerns as many countries struggle to contain the epidemic and some are being forced to reinstate lockdown measures.

Saudi Arabia, OPEC’s biggest producer and de facto leader, is moving with caution. While it boosted output by 920,000 barrels a day last month, the average remained below the limit it’s allowed to pump under the agreement, at 8.45 million a day.

Iraq and Nigeria made no progress in implementing their promised supply cutbacks, let alone the additional curbs they had pledged in compensation for earlier non-compliance.

Russia, the biggest non-OPEC member in the OPEC+ alliance, also increased production in July, according to preliminary data from the Energy Ministry.