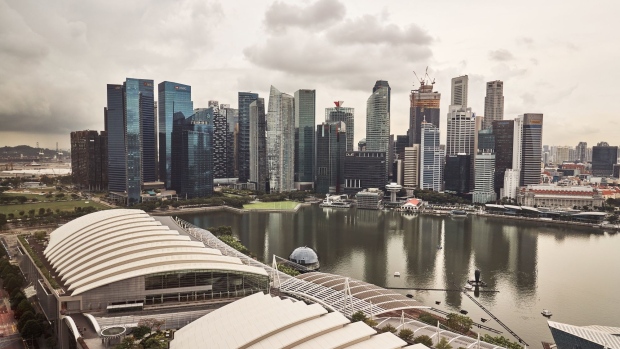 The central business district skyline from the Marina Bay Sands in Singapore, on Tuesday, Nov. 3, 2020. Singapore’s recovery from the coronavirus recession is likely to be "gradual and uneven," with firms and households restraining spending and a recent bounceback in industrial output likely to taper off in coming months, the central bank said. Photographer: Lauryn Ishak/Bloomberg , Bloomberg

(Bloomberg) -- Moonfare GmbH, a private-equity investment platform founded by a former KKR & Co. executive, has chosen Singapore as its Asia hub as the German startup seeks to triple its assets under management to at least $200 million by end of this year.

”We are prioritizing Singapore which is a very preferred hub because of the state of political environment and growth of the region,” Steffen Pauls, Moonfare’s founder and a former KKR managing director, said in an interview. “Hong Kong is still an important anchor point and location for us but our plan is to build up significantly in Singapore.”

The Berlin-based fintech company, which offers retail investors access to top-tier private equity opportunities via its digital investment platform, opened in Singapore on Thursday, its second office in Asia. The company started operation in Hong Kong in the midst of a mass protest in 2019 and has aggregated $60 million of capital from investors in Asia last year, a six-fold increase, Pauls said.

Hong Kong is grappling with an exodus of expatriates and financial professionals as the city has pursued a strict Covid Zero approach over the past two years and amid a tightening political crackdown after Beijing imposed a national security law in 2020 to quell dissent.

“We’re a bit cautious when it comes to China,” said Pauls, citing the regulatory crackdown across private sectors. Still, demand for private-equity investment in the rest of Asia has entered the the pace of “exponential growth,” he added.

Moonfare currently has six employees in Hong Kong, two in Singapore, and plans to add at least three to four people in the island state by end of this year, boosting its Asia headcount to more than 30 by the end of 2023, with many of the additions to be made in Singapore, according to Pauls. The firm is considering to expand into Australia, Philippines and Indonesia over next 12 to 24 months.

The platform provides a range of alternative investment opportunities ranging from private-equity, buyouts, infrastructure and growth funds, with 55% focused on U.S. and 30% on Europe. Asia’s contribution will rise to one third in two years from the current 20%, Pauls said, adding investors in the region are still lured by buyout, growth and mid-cap funds, while U.S. counterparts are shifting to traditional buyouts and infrastructure funds to hedge inflation risks.

Moonfare last year received $125 million in investments led by US-based technology investor Insight Partners, and is now valued at more than $600 million. It allows individuals to invest as little as S$80,000 ($57,645) to access different portfolios through partnerships with major fund managers including KKR, Carlyle Group and Khosla Ventures.

In 2021, Asia recorded growth of 12% in its ultra-high-net-worth population, making it the best-performing region in the world. Singapore attracted strong inflows of capital into both traditional and alternative investment strategies as assets under management reached $3.5 trillion in 2020, the company said.

(Adds firm’s valuation in the eighth paragraph. A previous version was corrected.)