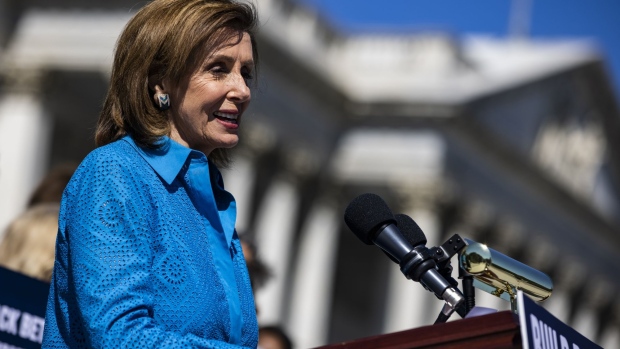 U.S. House Speaker Nancy Pelosi, a Democrat from California, speaks during a "Build Back Better For Women" event on the steps of the U.S. Capitol in Washington, D.C., U.S., on Friday, Sept. 24, 2021. Democratic leaders on Capitol Hill are running up against multiple critically important deadlines as they navigate a fraught political landscape where any misstep could have dire consequences for the national economy. , Bloomberg

“We will bring the bill tomorrow for consideration,” Pelosi said on ABC’s “This Week” on Sunday. “But you know I’m never bringing a bill to the floor that doesn’t have the votes,” she said, adding that she wouldn’t set “an arbitrary date.”

While the timeline signals that a Monday target for passing the bill in the House might slip, Pelosi projected confidence that Democrats will overcome divisions and also pass a bigger, separate bill with tax and spending priorities from child care to climate protection -- though with a lower headline number than $3.5 trillion.

Pelosi declined to lay down precise timing for the bigger bill, which is the focus of competing demands by Democratic moderates and progressives. The House Budget Committee advanced a draft version of the bill on Saturday for a possible floor vote this week, but Pelosi said further negotiations on the package lie ahead, “especially in terms of addressing the climate crisis.”

It also “seems self-evident” that the headline amount will be lower than initially envisaged the $3.5 trillion, she said.

Congressional Democrats are using a fast-track budget process to push the economic package through the Senate, bypassing Republicans. The Budget Committee had to assemble 13 component parts of the bill reported out of policy committees this month -- the last step before a floor vote.

Also on Congress’s agenda is avoiding a federal government shutdown looming at the end of the month and a potential default on U.S. government obligations in the weeks ahead.

The Senate is expected to vote this week to take up a House-passed stopgap funding bill that includes a suspension of the debt ceiling, though Republican opposition is likely to block its consideration.

Pelosi said she’s still hopeful for enough Republicans to find “some level of responsibility” and join in raising the debt limit. “We want this to be bipartisan,” she said.

At the same time, she said: “We need to make sure we keep government open -- and we will.”