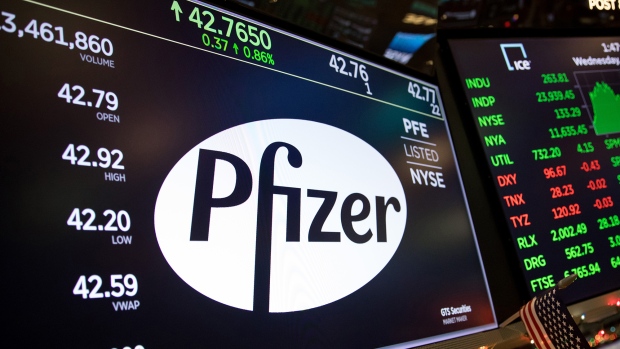 -The drugmaker’s division that makes medicines primarily given in the hospital, which it recently shifted into its new-drug unit, saw sales fall 8 per cent in the first quarter.

-It’s the first full quarter for incoming CEO Albert Bourla, who took over on Jan 1. He was widely expected to take over from now-chairman Ian Read who ran the company for eight years through two high profile, failed merger attempts for Allergan Plc and AstraZeneca Plc.

-The drugmaker boosted the midpoint of its adjusted earnings guidance for this year by a penny a share to US$2.83 to US$2.93, and said some of its gains would be offset by unfavourable fluctuations in the value of the U.S. dollar.

-Shares climbed about 0.7 per cent to US$39.85 at 9:36 a.m. in New York. Through Monday’s close, Pfizer shares had fallen 9.3 per cent since the start of this year, after being a top performer in the Dow Jones Industrial Average in 2018.

-Adjusted earnings per share climbed 13 per cent in the first quarter, Pfizer said.