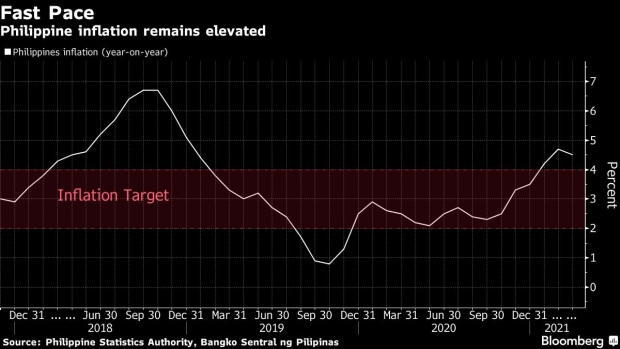 Benjamin Diokno, governor of the Bangko Sentral ng Pilipinas (BSP), poses for a photograph in Manila, the Philippines, on Wednesday, Feb. 5, 2020. Diokno said it would be better to cut interest rates sooner than later, a signal that policy makers will likely lower borrowing costs Thursday. , Bloomberg

(Bloomberg) -- Current monetary policy in the Philippines is adequate to address the economic fallout of the pandemic, while there’s still scope for additional aid on the part of fiscal authorities, the central bank’s governor said.

“We feel that our current monetary policy stance is still appropriate for the economy. So I don’t think there would be any drastic moves on our part to inject any more liquidity into the system,” Benjamin Governor Benjamin Diokno said Thursday in an interview with Bloomberg Television’s Kathleen Hays. “I think there’s still need for some fiscal stimulus.”

After cutting its key interest rate by 200 basis points last year, Bangko Sentral ng Pilipinas has held steady at recent policy meetings to support an economy in recession and as inflation run above the bank’s 2%-4% goal. While the BSP last month estimated prices in 2021 to average slightly above that target, Diokno said he’s confident inflation will be within its range longer term. Policy makers have pegged the pressure on transitory supply issues that don’t require a monetary response.

“We need to take care of the poor and the vulnerable who are affected by the lockdowns,” Diokno said. “We are looking at fiscal and health authorities to do their job.”

Many analysts see the central bank continuing to look past fast inflation to boost flagging demand. The reimposition of a strict lockdown in Manila and surrounding areas until at least April 11 is expected to shave about 0.8 percentage points off economic growth this year, underpinning bets that interest rates will be kept low for some time.

Diokno said Thursday that he estimates the Philippine economy to grow 6%-7% this year. That’s lower than official projections of 6.5%-7.5% before the latest lockdown, which are currently under review by the country’s economic managers.

The central bank has taken the lead in pandemic relief, as the government avoids outsized spending packages to preserve the nation’s credit rating. The bank reduced its key rate and the required reserve ratio by 200 basis points each last year, kept lending rules loose and extended loans to the government.

Policy makers are next scheduled to set rates May 13.