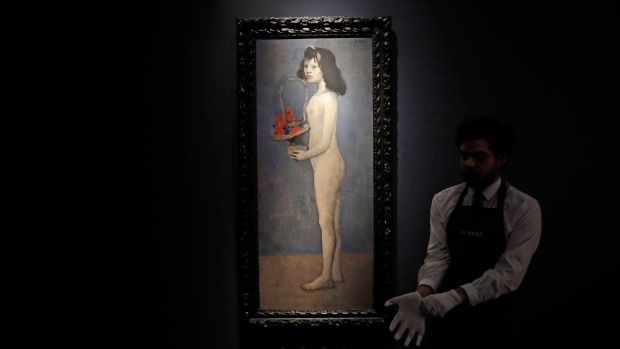 A member of Christie's London auction house staff with Pablo Picasso's 'Fillette a la corbeille fleurie', which was featured in the May 7-11 New York sale of the collection of Peggy and David Rockefeller, at their premises in London, Tuesday, Feb. 20, 2018. , AP Photo/Matt Dunham

A Pablo Picasso painting of a teenage nude with flowers fetched US$115 million at Christie’s on Tuesday.

Painted in 1905 during the artist’s Rose Period, “Young Girl with a Flower Basket” was estimated at US$100 million, the highest presale value among more than 1,500 lots of the Peggy and David Rockefeller collection.

The painting once belonged to Gertrude Stein, the American writer and collector who was friends with Picasso and other artists in early 20th-century Paris. Her brother Leo bought the painting for US$30 in 1905, according to Christie’s.

When the Stein estate came up for sale in 1968, Rockefeller formed a syndicate of fellow Museum of Modern Art trustees to buy it. The estate was estimated at US$6.8 million at the time. The members, including William S. Paley, Nelson Rockefeller and John Hay Whitney, agreed to draw numbers from a felt hat to determine the selection order. Rockefeller got the first pick and chose “Young Girl.”

Earlier in the auction, records were set for artists including Henri Matisse, whose painting generated US$80.8 million with fees. Claude Monet’s water lilies painting sold for a record US$84.7 million, topping the US$50 million estimate.

The Matisse and Monet works went to Xin Li Cohen, deputy chairman of Christie’s Asia, on behalf of clients.

The Matisse work, depicting a voluptuous female with her arms folded behind her head on a green chaise lounge, was estimated at US$70 million. The artist’s previous auction high was US$48.8 million. The sale continues.