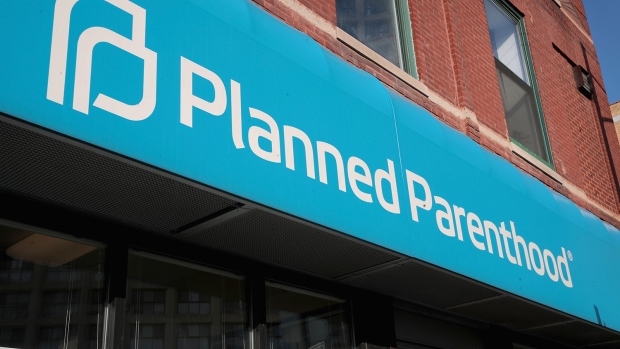 CHICAGO, IL - MAY 18: A sign hangs above a Planned Parenthood clinic on May 18, 2018 in Chicago, Illinois. The Trump administration is expected to announce a plan for massive funding cuts to Planned Parenthood and other taxpayer-backed abortion providers by reinstating a Reagan-era rule that prohibits federal funding from going to clinics that discuss abortion with women or that share space with abortion providers. (Photo by Scott Olson/Getty Images) , Photographer: Scott Olson/Getty Images North America

(Bloomberg) -- A new Trump administration rule will cut off Planned Parenthood and other health providers that offer abortion services from hundreds of millions of dollars of federal funding.

Under a regulation issued on Friday, no health-care provider that offers abortion services will be eligible for the federal Title X program, which last year offered $286.5 million in grants that funded family-planning services. Last year, about 4 million people used the program, according to the government.

The rule “prohibits the use of Title X funds to perform, promote, refer for, or support abortion as a method of family planning,” according to a fact sheet published by the Department of Health and Human Services.

Planned Parenthood has long been a target for anti-abortion lawmakers and politicians. The nonprofit offers a variety of preventive-health and family-planning services. The group has about 600 affiliated health-care centers used by more than 5 million people a year, according to its website.

“The administration has put health care providers in the Title X program in an impossible position: withhold information from its patients or get pushed out of the program,” the action fund said in a post on Twitter.

To contact the reporter on this story: Drew Armstrong in New York at darmstrong17@bloomberg.net

To contact the editors responsible for this story: Drew Armstrong at darmstrong17@bloomberg.net, Timothy Annett