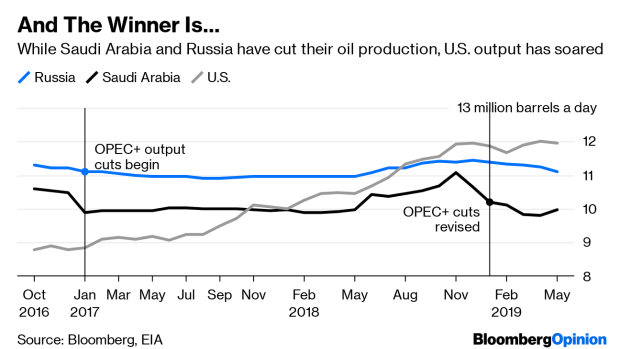 (Bloomberg Opinion) -- They got there in the end. After a fraught period when nobody could agree on when to meet, OPEC and its friends will gather on July 1-2 in Vienna. All 24 oil ministers will have to decide whether to renew their commitment to output cuts, which have have already run five times longer than originally intended.

OPEC’s three biggest members – Saudi Arabia, Iraq and the United Arab Emirates – are all willing to continue the policy of reduced production. But the big question is what Russia will do.

Though it has a lot of reason to back away from the deal, it will continue to pay lip service to the agreement. President Vladimir Putin’s wider ambitions to rebuild the country’s geopolitical role in the Middle East will outweigh objections from the boss of the country’s biggest oil company and any evidence that the cuts are undermining economic growth.

For Russia, the participation in OPEC+ output restraint is less about the needs of its oil industry and more about its President's relationship with his new ally in the region, Saudi Crown Prince Mohammed bin Salman. Putin has a lot at stake, with wider trade and investment deals still being negotiated. Continuing to support Saudi efforts to underpin oil prices can only help those discussions.

It’s not as if Russia has been stretching itself to meet lower production goals. True, its output was below its target in May. But that was only the first time that has happened since oil producers established their policy of restraint in 2016. The broader picture is that Russia’s reductions have been minimal.

While Saudi Arabia implemented its agreed production cut immediately and in full in January 2017, Russia dawdled, blaming cold winter weather that it said prevented it from shutting wells. The same pattern has emerged after the targets were reset for the latest round of cuts, which came into effect at the start of 2019. Russian production tailed off only because of the discovery of contaminated crude in its main export pipeline to Europe. Now that the tainted oil crisis looks to have passed, output should rise again in the coming weeks.

If compliance has almost always been minimal at best, why not ditch the policy? The country’s biggest oil company wouldn’t mind.

The loudest critic of Russia’s alignment with OPEC has been Igor Sechin, the boss of state-controlled oil giant Rosneft PJSC. He warned earlier this month that extending the deal would cause Russia to cede global market share to the U.S.

His complaints are a bit rich – in percentage terms, Rosneft cut output much less than either of its nearest rivals, Lukoil PJSC and Surgutneftegas PJSC, during 2017 and 2018, and was quick to boost it again as oil prices climbed in the second half of last year. Still, he has a point.

While Saudi Arabia and Russia are both producing less oil now than they were when the OPEC+ group was formed in late 2016, U.S. output has soared, rising by more than a third as producers tapping the country’s vast shale formations have bounced back from the price collapse of 2014-15.

Abandoning the deal would allow Russian output to grow – Rosneft and other companies have a string of new projects to bring into production. The cost of saying farewell to OPEC+ policy would inevitably be lower prices for every barrel they pump.

The output cut was one of the factors that undermined Russia’s economic growth in the first quarter, according to Kirill Tremasov, a former economy ministry official who’s now an analyst at Loko-Invest in Moscow. That might give Putin pause for thought when it comes to instructing his oil minister for the Vienna OPEC+ meeting.

But it is unlikely to change his mind. And he has a handy justification for insisting on reduced production – oil demand growth is starting to look more fragile. Russia can also demand flexibility to raise production if market conditions allow. That would be noteworthy, given that Saudi Arabia is producing 620,000 barrels a day less than it is permitted under the deal and might expect first dibs at any production increase.

The latest forecast from the International Energy Agency shows global oil inventories falling at a rate of 900,000 barrels a day in the third quarter. This assumes the output restraint is maintained and that demand growth doesn’t evaporate, as it did in earlier periods. That may provide some leeway to allow output to rise, but it won’t last long.

By the time the OPEC+ group meets, the G20 summit in Japan will have concluded and some of the U.S. trade relationships may have become a little clearer. But there will still be plenty of uncertainties for ministers to grapple with, not least the rising tensions in the Middle East.

So even if ministers can reach a deal for the rest of this year, don’t expect them to even start to tackle what they might do in 2020. As I have argued, if demand growth turns out to be much weaker than expected producers will have make even deeper cuts. That may finally prompt Putin to decide that he’s better off without the goodwill of the Saudi crown prince.